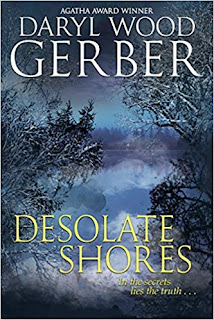 I received this book free from the author.  All opinions are my own

Book description
A chilling murder, an elusive killer, and a family mystery that hits too close to home . . .

After finding the body of her best friend on the icy shores of Lake Tahoe, Aspen Adams refuses to stand by and watch as the local sheriff’s department begins their search for the killer. Launching her own investigation, she’s soon confronted with a growing array of secrets—both about the friend she thought she knew and about many of the people in her own life. As fragmentary clues and escalating dangers threaten to derail her, she must also cope with the disturbing behavior of her deadbeat sister and troubled teenage niece.

Determined to overcome her personal demons over past failures, Aspen is driven to unravel the conflicting evidence and a shifting range of suspects to bring the killer to justice, even as a family trauma unfolds that threatens to upend her life. And as her investigation inexorably leads her to a shocking discovery and taunts her with a solution that is just out of reach, Aspen realizes that the killer wants nothing more than to see her and her niece dead . .

Meet the author - Daryl Wood Gerber
Agatha Award-winning author Daryl Wood Gerber writes the bestselling COOKBOOK NOOK MYSTERIES and FRENCH BISTRO MYSTERIES. As Avery Aames, she pens the bestselling CHEESE SHOP MYSTERIES. In addition, she writes stand-alone suspense thrillers, including GIRL ON THE RUN and DAY OF SECRETS and DESOLATE SHORES. Fun tidbits: Daryl jumped out of a perfectly good airplane, and she hitchhiked around Ireland by herself. Also, as an actress, Daryl appeared in “Murder, She Wrote.” She loves to read, cook, and golf. She has a frisky Goldendoodle named Sparky who keeps her in line!

My thoughts
I really enjoyed this book. It was a mystery that just pulled me right in. The characters were well done and I liked that we got a bit of a background on most of them.  I am sure as the series goes we may learn a little more about the main characters.  I liked how the police force kind of let Aspen do her own digging to look for clues.  The way Aspen and Nick played off of each other was a nice start to a continuing story line.  I hope things get better with her niece Candace and sister Rosie.  The clues the author gave helped me form my own opinions of what was going on. One of my theories was right and one was wrong.  I am looking forward to more in this series.
Posted by Angela - Bookaunt at Thursday, August 08, 2019