The Last December by Velda Allard McElroy - A review 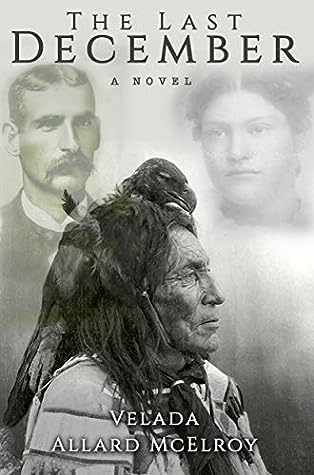 The Last December by Velada Allard McElroy
293 pages - Paperback
Published September 19th, 2019
ISBN: 9781088588451
About the book:
TAKE A WILD THROUGH HISTORY AND EXPERIENCE THE LAST DECEMBER!
Eighteen-year-old Pearl Hardisty discovers the small town of Silver Lake in Eastern Oregon has more to offer than dry sage brush, old farmhouses, and unbearable freezing cold winters when she met Frank Bunyard. The kindhearted, handsome cowboy made her glad she decided to move with her family after all. Through stories Frank shares with her she learns about friendship, survival, and an unforgettable story of privation and loss from a small band of Modoc Indians who were left behind after the Modoc war. When the tightly knit community of Silver Lake experiences its own tragedy on Christmas Eve in 1894, they learn just how fragile life really is and how important it is to lean on one another and open their hearts and homes to those they once tried to destroy.
Meet the author - Velada Allard McElroy:
Velada Allard McElroy is proud to call Eugene Oregon her home. Her ancestors settled in the Oregon Territory mostly in Lake Co. around the mid 1850's after crossing the plains. Hearing stories that were passed down through generations she learned about the Silver Lake fire on Christmas Eve in 1894 where several of her relatives perished and about her third great grandfather, George C. Duncan, who was instrumental in helping several Modoc Indians after the Modoc war.

Velada is an Office Manager & Bookkeeper for a non-profit who loves creative writing, genealogy, studying history and cultural anthropology.
My thoughts:
I enjoyed reading this book from a new to me author.  Reading this book felt like you were right there feeling the same emotions as the characters.  The author did a good job of making you feel as if you were a part of the story. The Modoc Indian War was not one I had heard of before and I am thankful to have learned more about it through the author's telling of it.  Another tragic event in the Native American History.  I also liked how this was based on true facts and that the author had a person connection to the characters.  A very good book in my opinion.
Posted by Angela - Bookaunt at Monday, March 21, 2022