A Hint of Mischief by Daryl Wood Gerber - Review 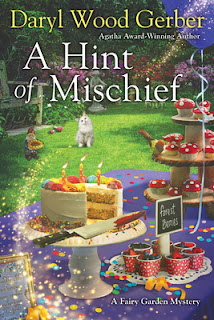 I received this book from the author.  All opinions are my own.
Book details
A Hint of Mischief by Daryl Wood Gerber
A Fairy Garden Mystery #3
Paperback - Kensington Publishing
Published June 18th, 2022
368 pages
ISBN: 9781496736048
Book synopsis
From Agatha Award-winning author Daryl Wood Gerber, the third in an enchantingly whimsical series featuring Courtney Kelly, the owner of a fairy-gardening and tea shop in Carmel, California. It’s a special place brimming with good vibes and the kind of magical assistance its proprietor will need to prepare for an old sorority sister’s birthday bash awhile solving a puzzling murder!

Courtney has thrown a few fairy garden parties—for kids. But if a local socialite is willing to dip into her trust fund for an old sorority sister’s fortieth birthday bash, Courtney will be there with bells on. To make the job even more appealing, a famous actress, Farrah Lawson, is flying in for the occasion, and there’s nothing like a celebrity cameo to raise a business’s profile.

Now Courtney has less than two weeks to paint a mural, hang up tinkling windchimes, plan party games, and conjure up all the details. While she works her magic, the hostess and her girlfriends head off for an indulgent spa day—which leads to a fateful facial for Farrah, followed by her mysterious death. Could the kindhearted eyebrow waxer who Farrah berated in public really be the killer, as the police suspect? Courtney thinks otherwise, and with the help of her imaginative sleuth fairy, sets out to dig up the truth behind this puzzling murder . . .
Meet the author - Daryl Wood Gerber
Daryl Wood Gerber is the Agatha Award-winning, nationally bestselling author of the Fairy Garden Mysteries, the French Bistro Mysteries, and the Cookbook Nook Mysteries, as well as the Cheese Shop Mysteries written under the name Avery Aames. She also writes standalone suspense novels and the Aspen Adams Novels of Suspense. Prior to her career as a novelist, she was an actress with roles in television shows including "Murder, She Wrote," and she wrote for the popular TV sitcom "Out of this World." Originally from the Bay Area, she now lives in Southern California where she likes to cook, garden and spend time with her frisky Goldendoodle named Sparky. Visit her online at DarylWoodGerber.com.
My thoughts
I enjoyed this new installment of the fairy garden mystery.  This time there was more than one mystery that needed solved, from a stolen manuscript, missing items from a home, a thief robbing businesses to a murder of a movie star.  Follow Courtney and her fairy Fiona as they try to solve the mystery with the help of the other fairies.  The adult fairy garden party was fun to read about as you don't hear of too many adults wanting to have a party like that.  I also like to read about Fiona growing as a fairy.  The way Pixie the cat and Fiona get along warms me.  This is a fun read and even though it is the third in the series it can be read as a stand alone but I guarantee you will want to read the whole series.
Posted by Angela - Bookaunt at Sunday, July 31, 2022