A Spear of Summer Grass by Deanna Raybourn 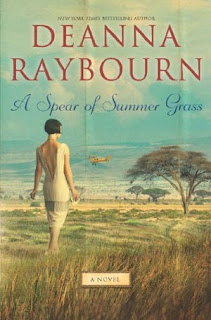 Synopsis: (sex and violence present but not graphic)
Paris, 1923
The daughter of a scandalous mother, Delilah Drummond is already notorious, even among Paris society. But her latest scandal is big enough to make even her oft-married mother blanch. Delilah is exiled to Kenya and her favorite stepfather's savanna manor house until gossip subsides.
Fairlight is the crumbling, sun-bleached skeleton of a faded African dream, a world where dissolute expats are bolstered by gin and jazz records, cigarettes and safaris. As mistress of this wasted estate, Delilah falls into the decadent pleasures of society.
Against the frivolity of her peers, Ryder White stands in sharp contrast. As foreign to Delilah as Africa, Ryder becomes her guide to the complex beauty of this unknown world. Giraffes, buffalo, lions and elephants roam the shores of Lake Wanyama amid swirls of red dust. Here, life is lush and teeming -- yet fleeting and often cheap.
Amidst the wonders -- and dangers -- of Africa, Delilah awakes to a land out of all proportion: extremes o heat, darkness, beauty and joy that cut to her very heart. Only when this sacred place is profaned by bloodshed does Delilah discover what is truly worth fighting for -- and what she can no longer live without.

My Review: I think the author did a very good job with her descriptions. You can imagine yourself right there in Africa with Delilah. I still not sure if I liked Delilah or not, she seemed to be a spoiled rich "kid" type and very free spirited. Although she also had a kind side taking care of the villagers. I enjoyed the way Ryder and  Delilah's characters played off of each other in a manner of speaking. This book had the right blend of historical and romance with just a touch of mystery thrown in to make me enjoy reading it.  This was the first book of Deanna's I have read and even though it was not in a time period I would normally read I have to say I enjoyed it. I have Deanna's Lady Grey book on my shelf and can't wait to jump into it.


As a sixth-generation native Texan, I grew up in San Antonio, where I met my college sweetheart. I married him on graduation day and went on to teach high school English and history. During summer vacation when I was twenty-three, I wrote my first novel. After three years as a teacher, I left education to have a baby and pursue writing full-time.
Fourteen years and many, many rejections after my first novel, I signed two three-book deals with MIRA Books.
"Sex, lies and awesome clothing descriptions" is how one reader described my debut novel, Silent in the Grave, published in 2007. The first in the Silent series, the book follows Lady Julia Grey as she investigates the mysterious death of her husband with the help of the enigmatic private enquiry agent Nicholas Brisbane. From the drawing rooms of the aristocracy to a Gypsy camp on Hampstead Heath, Silent in the Grave was my love letter to Victorian London.
The series continues with the second book, Silent in the Sanctuary (2008), a classic English country house murder mystery with a few twists and turns for Brisbane and Lady Julia along the way, while the third book, Silent on the Moor (2009), is set in a grim manor house on the Yorkshire moors. My favorite part of writing Moor was getting to spend time in Yorkshire, one of the most wildly beautiful places I have ever been.
March 2010 saw a departure from the series with the release of The Dead Travel Fast, a mid-Victorian Gothic thriller that chronicles the adventures of novelist Theodora Lestrange as she leaves the safety and security of her Edinburgh home for the dark woods and haunted castles of Transylvania. I returned to Lady Julia and her companions with Dark Road to Darjeeling(October 2010), this time delving into my most exotic setting yet in the foothills of the Himalayas. The fifth series book, New York Times bestseller The Dark Enquiry (July 2011) saw Lady Julia back in her beloved London again, while a digital holiday novella, Silent Night (November 2012) highlighted the March family festivities at Bellmont Abbey.
But 2013 introduces a new setting to my work—1920s British East Africa. In A Spear of Summer Grass (May 2013), disgraced flapper Delilah Drummond is sent to Africa to weather the storm of her latest scandal. There she meets Ryder White, a local legend for more reasons than one—and the perfect man to teach her about the continent he loves. Ryder was introduced to readers in the digital prequel novella Far in the Wilds (March 2013).
I am thrilled that 2014 will see another 1920s release, City of Jasmine (May 2014), and I am hard at work on my next project in my little pink study in Virginia with a doodle draped over my feet as I write.
You can find me blogging a few days a week at http://deannaraybourn.com/blog/. Be sure to sign up for my monthly newsletter, check out my contests and book trailer videos, and find me onTwitter and Facebook 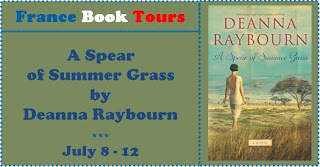