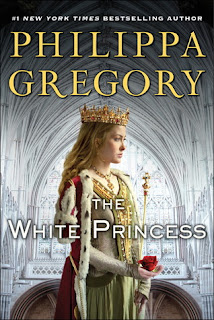 Synopsis: The newest novel from #1 New York Times bestselling author and “queen of royal fiction” (USA TODAY) Philippa Gregory tells the passionate story of Elizabeth of York, daughter of the White Queen, who gets caught in the middle of a battle for the crown of England. The White Princess opens as the news of the battle of Bosworth is brought to Princess Elizabeth of York, who will learn not only which rival royal house has triumphed, Tudor or York, but also which suitor she must marry: Richard III her lover, or Henry Tudor her enemy.
A princess from birth, Elizabeth fell in love with Richard III, though her mother made an arranged betrothal for her with the pretender to the throne: Henry Tudor. When Henry defeats Richard against all odds, Elizabeth has to marry the man who murdered her lover in battle, and create a new royal family with him and his ambitious mother: Margaret Beaufort, The Red Queen. But, while the new monarchy can win, it cannot, it seems, hold power in an England which remembers the House of York with love.The new king’s greatest fear is that somewhere, outside England, a prince from the House of York is waiting to invade and re-claim the throne for the house of York. Fearing that none of his new allies can be trusted, Henry turns to his wife to advise him, all the time knowing that her loyalties must be divided. When the young man who would be king finally leads his army and invades England, it is for Elizabeth to decide whether she recognizes him as her brother and a claimant to the throne, or denies him in favor of the husband she is coming to love…
My review: I think this is another great book by Philippa. I have enjoyed this entire series. You can read the books as a stand alone or as a series. I like how the writing of the book makes the characters come alive and you feel for Princess Elizabeth of York and get to know her better through this book. This book gives you a good idea of what it was like to grow up in the time of the war of the roses and to know that you are just a pawn to be used to bring your family to the top.
Posted by Angela - Bookaunt at Tuesday, July 23, 2013