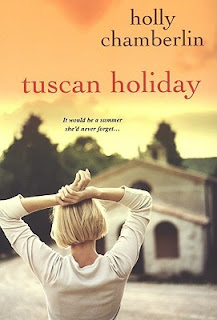 Synopsis: Marina Caldwell is thrilled to receive a two-week trip to Tuscany as a college graduation gift. That is, until she realizes her mother wants to go with her. The gulf between idealistic single parent Elizabeth and cautious, controlled Marina seems too wide to bridge, even with the aid of chilled Prosecco and mouthwatering panforte.
But amid the magical sights and scents of Florence, Marina's careful plans for her vacation - and her future - are thrown into chaos, and Elizabeth's long held assumptions crumble. Soon a world of unexpected possibilities unfolds for both - buoyed by newfound courage, unshakeable love, and the stirring beauty of a Tuscan sky...

My review: I am going to start by saying that this book was nothing that I thought it was going to be. I thought it was going to be a light chick lit book but it was not. It was deeper than that. One thing that I did not like was the little blurbs at the beginning of each chapter. I kind of understand why they needed to be there but I did not care for them I thought they were mean. Ok enough about that. Now the good part, I liked the idea of the mother-daughter trip to Italy. At first I was not sure that I cared for Marina but as the book went along I started to like her and I began to understand her more. From the first time Jotham came into the story I knew there was something up with him and I did not like him. Elizabeth is someone I felt sorry for - her she is a woman who had a daughter on her own, has an over-bearing mother, and a daughter who forgets about her,, the one good thing is her boyfriend. When they get to Italy Elizabeth is having fun touring all the historical sites while Marina was just passing time until it was time to go home. Little does Marina know that things are about to change for her. I can't say what happens to Marina - it is nothing bad - as I don't want to ruin the story. When this change comes for Marina she does not expect it to totally change her life forever. Marina's trip to Italy ends up being a real eye opener for her and in the end brings her closer to her mom. I am hoping there is a sequel to this book as it left me hanging at the end wanting more of the story. All in all I am glad I read this book.
Posted by Angela - Bookaunt at Sunday, August 04, 2013