Death of a Schoolgirl by Joanna Campbell Slan - Review and Giveaway 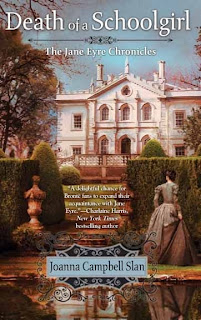 
Synopsis: In her classic tale, Charlotte Brontë introduced readers to the strong willed and intelligent Jane Eyre. Picking up where Brontë left off, the year is now 1851, and Jane’s life has finally settled into a comfortable pattern. She and her beloved Edward Rochester have married, and have an infant son. But Jane soon finds herself in the midst of new challenges and threats to those she loves…
Jane can’t help but fret when a letter arrives from Adèle Varens—Rochester’s ward and Jane’s former pupil, currently at boarding school—warning that the girl’s life is in jeopardy. Although it means leaving her young son and invalid husband, and despite never having been to a city of any size, Jane feels strongly compelled to go to London to ensure Adèle’s safety.
But almost from the beginning, her travels don’t go as planned—she is knocked about and robbed, and no one believes that the plain, unassuming Jane could indeed be the wife of a gentleman. Even when she arrives at the school, the headmistress takes her for an errant new teacher, and berates her for her late arrival. Most shocking to Jane is the discovery that Adèle’s roommate has recently passed away under very suspicious circumstances, yet no one at the school seems concerned. Taking advantage of the misunderstanding, she decides to pose as the missing instructor—and soon uncovers several unsavory secrets, which may very well make her the killer’s next target…

My Review: If you are a fan of Jane Eyre, mysteries or Joanna's books then this is the perfect book for you. I wanted to read this book first of all because I have been a fan of Joanna's since the days of her writing journaling tips for scrapbooks, then I saw it was a mystery book and set in Victorian London and I was hooked. Joanna did such a good job with the characters in this book that you can't help but think they are real. The mystery part of this book was done in such a way that you don't want to put this book down. I have to confess I have not read Jane Eyre but after reading this book it makes me want to go back and pick it up. Jane was such a helpful caring person that she is a person I would love to meet if she really existed. I am looking forward to continuing on with this series.

Thanks to Joanna I am able to offer a copy of the book to one lucky winner.

Joanna also is offering a grand prize that she says she will “mail it anywhere!” “Le Plus Grande Prize (ha-ha!) will be a Lowood Institution Lacrosse sweatshirt, a “Being yourself is the key” pencil case, a Jane Eyre mug, and a small Jane Eyre quotations journal.”

Check out this giveaway as well and the rest of the blog tour stops: Click here