The Bones of Paris by Laurie R. King - Review and Giveaway 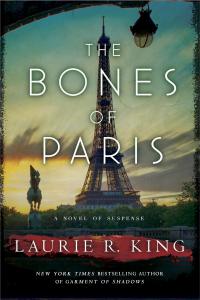 Synopsis: Paris, France; September 1929. For Harris Stuyvesant, the assignment is a private investigator's dream -- he's getting paid to troll the cafes and bars fo Montparnasse, looking for a pretty young woman. The American agent has a healthy appreciate for la vie Boheme despite having worked for years at the U. S. Bureau of Investigation. The missing person in question is Philippa Crosby, a twenty-two year old from Boston who has been living in Paris, modeling and acting. Her family became alarmed when she stopped all communications, and Stuyvesant agreed to track her down. He wholly expects to find her in the arms of some up-and-coming artist, perhaps experimenting with the cocaine that is suddenly available on every rue and boulevard.
As Stuyvesant follows Philippa's trail through the thriving, decadent ex-patriate community of artists and writers, he finds that she is known to many of its famous-and infamous-inhabitants, from Shakespeare & Co's Sylvia Beach to the Surrealist photographer Man Ray. But when the evidence leads to Stuyvesant to the Theatre du Grand-Guignol in Montmatre, his investigation takes a sharp, disturbing turn. At the Grand-Guignol, murder, insanity, and sexual perversion are all staged to brutal effect in short, gut-churning acts. Depravity as art; savage human nature on stage.
Soon, it becomes clear that one missing girl is a drop in the bucket. Here, amid the glittering lights of the cabarets, hides a monster whose artistic coup de grace is to be rendered in blood and gore. And Stuyvesant will have to descend into the darkest depths of perversion to find a killer ... sifting through The Bones of Paris. (from the author's website)

My review: I am going to start by saying that I have not read the first book in this series, Touchstone, but that did not stop me from reading this one. You are able to read this book as a stand alone. The reason I wanted to read this is because I love books set in Paris as well as mysteries so this had me intrigued. Laurie did a very good job in the research for this book, you could tell by the way she described the time period and her use of people from that time. I thought the author did a good job with her character development. Another thing I enjoyed besides the historical aspect was the suspense in this story. This is a book you won't be able to put down once you start. 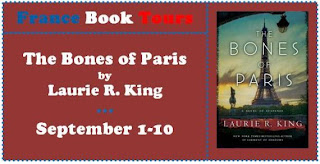 Here are some links to purchase the book:

Purchasing Links:
Amazon: The Bones of Paris
B&N: The Bone of Paris
Google: The Bones of Paris
iBookstore: The Bones of Paris
IndieBound: The Bones of Paris
Author's bio and links:
Laurie R. King is the New York Times bestselling author of ten Mary Russell mysteries, five contemporary novels featuring Kate Martinelli, and the acclaimed novels A Darker Place, Folly, Keeping Watch, and Touchstone. She lives in Northern California where she is currently at work on her next novel.
http://www.laurierking.com/
https://www.facebook.com/laurierking
https://twitter.com/LaurieRKing

a Rafflecopter giveaway
Posted by Angela - Bookaunt at Monday, September 09, 2013