The Tea Shop on Lavender Lane by Sheila Roberts 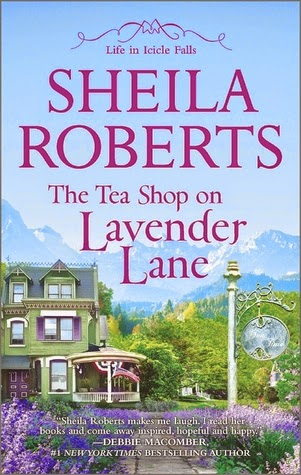 Synopsis: When it comes to men, sisters don't share!
After a fake food poisoning incident in L.A., Bailey Sterling's dreams of becoming a caterer to the stars collapse faster than a soufflé. Now Bailey's face is in all the gossip rags and her business is in ruins. But the Sterling women close ranks and bring her back to Icicle Falls, where she'll stay with her sister Cecily. All goes well between the sisters until Bailey comes up with a new business idea—a tea shop on a charming street called Lavender Lane. She's going into partnership with Todd Black, who—it turns out—is the man Cecily's started dating. It looks to Cecily as if there's more than tea brewing in that cute little shop. And she's not pleased. Wait! Isn't Cecily seeing Luke Goodman? He's a widower with an adorable little girl, and yes, Cecily does care about him. But Todd's the one who sends her zing-o-meter off the charts. So now what? Should you have to choose between your sister and the man you love (or think you love)?

My review: As with the rest of this series I absolutely loved this book. When I start reading any of Sheila's book I want to savor each of them so I find myself reading even slower so that it will last me. I felt so bad for Bailey when the start faked the food poisoning - I don't know if I would have been as nice as Bailey was - I think I would have sued her for slander. It was so nice that the sisters stepped in and brought Bailey home to help her get through this tough time. As for Cecily - I also felt bad for her as it seems she just can't get a break when it comes to love. I don't want to spoil the story by telling you what happens but you will be happy with the ending. I would love to live in Icicle Falls as it is such a quaint little town with such good people.
Posted by Angela - Bookaunt at Thursday, July 24, 2014