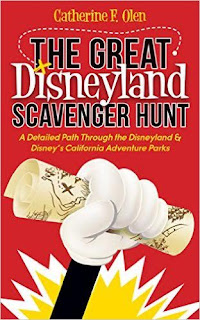 Synopsis:
See the enchantment of the Disneyland resort in a whole new way with "The Great Disneyland Scavenger Hunt." From Main Street U.S.A. to New Orleans Square, Walt Disney lovingly designed every detail to immerse guests in the magic of his theme parks.

See Disneyland and Disney’s California Adventure through new eyes when you discover fantasy, thrills, and dreams around every turn. Whether you’re perusing the shops, waiting in line, or riding attractions, there’s plenty to uncover for even the most knowledgeable Disney fan.

If this is your first visit or your five hundredth, you will discover something new with "The Great Disneyland Scavenger Hunt."


About the author:
Catherine Olen has enjoyed a love affair with the magic of the Disney theme parks for as long as she can remember, counting herself among Disneyland passholders for the last twenty-five years. Previously, Olen owned and operated Hollywood Grave Hunter and is the proud author of The Final Curtain: Celebrity Deaths and The Upside of Undertaking, chronicling her previous career experiences. She has been a correspondent to Entertainment Tonight (US and France), The Biography Channel, Reelz Network, and the Mark & Brian radio show.

Guest Post:
Mickey Mouse, Tinkerbell, Cinderella Castle. Has there ever been a time that these words did not invoke visions of Disneyland in all its glory. Walking through the gates and seeing that first glimpse of Cinderella castle is a look directly into the imagination of creator Walt Disney. Disney took all of our favorite childhood stories from fairy tales to science fiction and placed his guests right into the middle of the story. Ride on a raft with Tom Sawyer, ride through space with Jules Verne, save Snow White from the evil queen. All of the stories ending with Happily Ever After.

Writing The Great Disneyland Scavenger Hunt is a love story to Walt Disney’s vision. In its pages, I take guests through Disneyland and Disney’s California Adventure as seen through my eyes. For over forty years, I have had a love affair with all things Disney. As an annual pass holder for over twenty-five years, I have seen the Disney parks from many different perspectives. My first visit as a small child with my family when every part of the parks seemed bigger than life. As a young adult and I thrilled to ride Space Mountain and Indiana Jones and The Temple of the Forbidden Eye. As a new parent, I was given the gift of seeing the parks once again through the eyes of a child as I took roll after roll of film watching my own daughter interact with the characters. Even through all of my changes, Disneyland has been changing even more from opening day July 17, 1955 to The opening of Haunted Mansion in 1969 to the rededication of Fantasyland in the 1980’s. Walt Disney’s immortal words, “Disneyland will never be completed. It will continue to grow as long as there is imagination left in the world.”

Now I take you on a journey through Disneyland resort to discover for yourself:

· Which of the seven dwarves is seen winking at you as you exit Snow White’s Scary Adventure?
· Which river is not one you explore on The Jungle Cruise?
· What is the name of your host in The Enchanted Tiki Room?

· Did you know you can ride in the wheel house of The Mark Twain Riverboat with the captain? You even get to blow the whistle during your cruise.
· Did you know you can get a phone call from Mickey Mouse on your birthday?
· The large yellow mushroom that stands outside the Alice in Wonderland attraction was once used as a ticket booth?

Even the most seasoned visitor to Disneyland resort will find something new within the page of The Great Disneyland Scavenger Hunt.