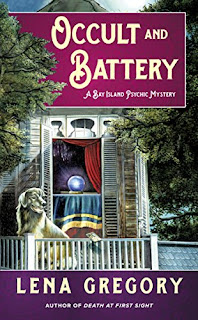 Cass Donovan uses her skills as a former psychiatrist to get away with pretending to be psychic, but she’s not about to let anyone get away with murder…

The outlook is not so good for Cass’s psychic shop, Mystical Musings. With winter winds discouraging tourists from riding the ferry from Long Island to Bay Island, Cass hopes to draw in more customers by hosting a murder mystery weekend, complete with a séance, in a supposedly haunted mansion.

But Cass begins to lose her spirit when her ex-husband shows up, along with his fiancée—Cass’s ex-best friend. Then, after one of the guests is found dead, a blizzard blows in, trapping everyone inside with a murderer. Now Cass must divine who did the deed before her reputation and her livelihood fade away.

About The Author
Lena lives in a small town on the south shore of eastern Long Island with her husband and three children.

My thoughts:
This was a fun addition to this series. I enjoyed meeting up with Cass and her cast of friends again. It was also fun to hear about all the trouble Beast gets into as a puppy needing a little training. I felt kind of bad for Cass as her business had been a little slow during winter so she was trying to find a way to make some money and ends up finding a murder. The author gives us plenty of suspects as well as some twists so it was hard for me to figure out who was the murderer. I liked how her friends helped her out. The cast of characters was very likable and the setting was fun. Even though this is the second book in the series you are able to read it as a standalone. I myself am looking forward to the next book to see what kind of trouble Cass and her friends can get into.

I’m Cass Donovan, and I own Mystical Musings, a psychic shop on Bay Island, a small island between the north and south forks of Long Island, New York. Though Bay Island is booming during the summer months, when tourists flock to the island beaches, climb to the tops of the lighthouses, and meander through the shops along the boardwalk, business tends to slow down come fall and doesn’t start to pick up again until spring. During the winter, the island is downright deserted, except for the locals. That being the case, I can’t only cater to the tourists.

Most of my business involves doing readings, both individual and group. My group readings have become so popular, among locals and tourists, I’ve decided to finish a room upstairs to allow room for more tables. But not everyone on Bay Island is receptive to interacting with the dearly departed, so I also stock a large inventory of crystals, essential oils, and even some small souvenirs.

My best-selling souvenirs, though, are the ones I make myself, and they cost almost nothing to make. They are easy enough that anyone can make them, and yet, sometimes I can’t keep up with the demand. I don’t often reveal my secrets—it certainly wouldn’t help my business for people to realize they could easily create beautiful centerpieces on their own—but I’ll make an exception today.

Mystical Musings sits on one end of the boardwalk. The front of the shop faces the boardwalk, while the back faces the beach, offering a gorgeous view of the bay and the lighthouse from the wide, wrap-around porch. My house is a fairly short walk down the beach from the shop, which is perfect.

I often grab a bucket and walk along the beach from home to the shop. I collect anything I find that catches my interest; beach glass, seashells, small rocks, twigs, beach grass, driftwood, even a length of old fishing net. Once in a while, I make a trip over to Long Island and hit up the antique shops, or even the dollar stores, and pick up glass containers, mason jars, and small candles.

Then I sift through whatever interesting things I found on the beach and sort them into jars. Some jars get candles in the center—of course, I’m careful not to put anything flammable in those. Others get beach grass or twigs sticking out the top. If the jars have no fun decorations on them, I often tie a ribbon or a leather cord around them. I sometimes arrange a small bit of fishing net on the table beneath the jars, set out a few strategically placed pieces of driftwood, and that’s it. You have a beautiful centerpiece at very little cost that takes minutes to make.

I often place them on the tables during my group readings and almost always sell out afterward. If you decide to give it a try, be sure to post pictures. I’d love to see what you come up with! 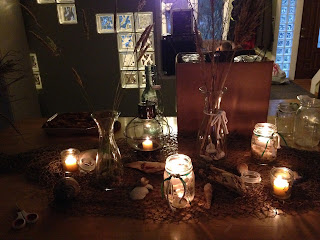 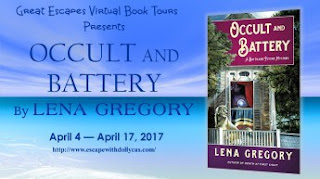