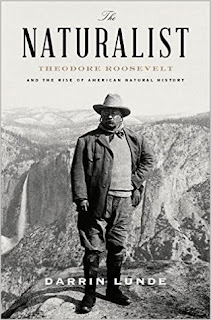 About the book:
The surprising story of intrepid naturalist Theodore Roosevelt and how his lifelong passion for the natural world set the stage for America's wildlife conservation movement.

Perhaps no American president is more associated with nature and wildlife than Theodore Roosevelt, a prodigious hunter and adventurer and an ardent conservationist. We think of Roosevelt as an original, yet in The Naturalist, Darrin Lunde shows how from his earliest days Roosevelt actively modeled himself in the proud tradition of museum naturalists—the men who pioneered a key branch of American biology through their desire to collect animal specimens and develop a taxonomy of the natural world. The influence these men would have on Roosevelt would shape not just his personality but his career, informing his work as a politician and statesman and ultimately affecting generations of Americans' relationship to this country's wilderness. Pulling from Roosevelt's diaries and expedition journals, Lunde constructs a brilliantly researched, singularly insightful history that reveals the roots of Roosevelt’s enduring naturalist legacy through the group little-known men whose work and lives defined his own.

About the author:
DARRIN LUNDE is a Supervisory Museum Specialist in the Division of Mammals at the Smithsonian's National Museum of Natural History. Previously, he worked at the American Museum of Natural History, where he led field expeditions throughout the world. Lunde has named more than a dozen new species of mammals and provided valuable scientific insights on hundreds of others. He lives in Maryland.

My thoughts:
I have never read anything about Theodore Roosevelt and do not know much about him other than he loved to hunt and helped established the national park system. So when I saw this book I thought it would be a good addition to my library and a good way to learn more about him. One of my favorite quotes from the book by him is: "The country is the place for children, and if not the country, a city small enough so that one can get out into the country." One thing I found interesting is that his wife Kermit went on many hunts with him and helped to contribute to the exhibits in the museum. This book does not focus on his time as a president although it is mentioned. This book focuses on the rest of his live and his love of nature. It was kind of funny how he in a lived a contradictory life. While he wanted to protect nature he as the same time was an avid hunter and collect animals so we would know more about them. I thought the book very interesting and was happy to learn about one side of this great man.