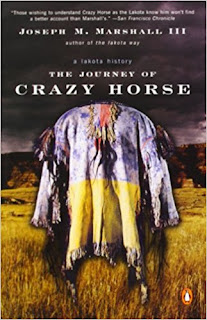 As a brilliant leader of a desperate cause and one of the most perennially fascinating figures of the American West, Crazy Horse crushed Custer's 7th Cavalry and brought the United States Army to its knees. Now, with the help of celebrated historian Joseph Marshall, we finally have the opportunity to know Crazy Horse as his fellow Lakota Indians knew him.

Drawing on extensive research and a rich oral tradition that it rarely shared outside Native American circles, Marshall - himself a descendent of the Lakota community that raised Crazy Horse - creates a vibrant portrait of the man, his times, and his legacy. From the powerful vision that spurred him into battle to the woman he loved but lost to duty and circumstance, this is a compelling celebration of a culture, an enduring way of life, and the unforgettable hero who remains a legend among legends.

Meet the author - Joseph Marshall III
Joseph M. Marshall III was born and raised on the Rosebud Sioux Reservation and holds a PhD from the reservation university, which he helped to establish. The award-winning author of ten books, including Hundred in the Hand, The Lakota Way, and The Journey of Crazy Horse, he has also contributed to various publications and written several screenplays. His first language is Lakota, he handcrafts primitive Lakota bows and arrows, and he is a specialist in wilderness survival. Marshall's work as a cultural and historical consultant can be seen and heard in the Turner Network Television and Dreamworks epic television miniseries Into the West.

My thoughts
I enjoyed this book and learned more about Crazy Horse as I read. Of course the more I read the the more I angry I got. Growing up around Native American Reservations I have a respect for them. I know they were treated badly but I did not realize exactly what they did to him and his family. I liked that this was told from their point of view which I feel should have been done a long time ago. I enjoyed the story at the end as well as who the author got his information from. There is a lot of information packed in this book but not so much that it is overwhelming. The way the author wrote it makes you want to continue reading to learn more about Crazy Horse and his people. I recommend this book to anyone who is wanting to learn a little more about our history from the way it happened and not the way the history books want you to think it all happened.
Posted by Angela - Bookaunt at Tuesday, January 30, 2018