Confessions of a Red Herring by Dana Dratch - Review and Giveaway 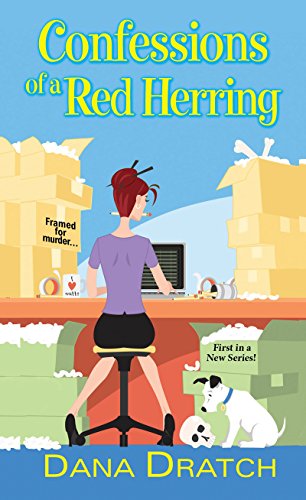 Book description
As a reporter, she’s used to covering the news. Now she’s the headline.

Alex Vlodnachek has been a reporter for 12 years, a P.R. rep for three months, and a murder suspect for all of 24 hours. When her agency's double-dealing CEO is stabbed, scheming co-workers cast the new redhead as a compelling red herring. The story is media catnip—especially her salacious nickname: Vlod the Impaler.

Even Alex has to admit she looks guilty.

Out of a job and under suspicion, Alex is running low on cash, when she’s visited by a second disaster: her family. Soon her tiny bungalow is bursting with her nearest and not-so-dearest. To keep herself out of jail—and save what’s left of her sanity—Alex returns to her reporting roots. She goes undercover to reclaim her life, break the story, and unmask a murderer. Pretty much in that order.

What she doesn’t know: The killer also has a to-do list. And Alex is on it.

Meet the author - Dana Dratch
Dana Dratch is a former newspaper reporter and current personal finance writer. When she's not finishing Seeing Red—the next Alex Vlodnachek mystery—you'll spot her byline on a host of top news sites. You can learn more about her mysteries at ConfessionsofaRedHerring.com.

My thoughts
I enjoyed this book and thought it was a good start to a new series. I liked how the story flowed off the page and was a quick read. It was fun getting to know Alex and her crazy family. Who of us does not have a little crazy in our families too. Alex had her work cut out for her trying to solve the mystery of who offed the CEO of the company she worked for. Everyone thought she did it and she had no choice but to prove them wrong. I liked the little twists the author gave and had a fun time trying to figure out for myself who did the deed. I thought this was a fun, quick read and look forward to the next book.