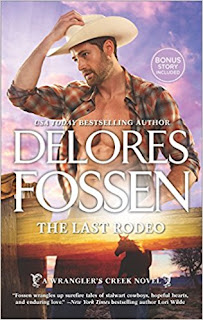 Book description
The most important two words for this Wrangler’s Creek rodeo cowboy? I do…

Lucian Granger isn’t winning any Mr. Cowboy Congeniality awards. Known in his small Texas town as “Lucifer” thanks to his surly nature and knack for scaring people away from getting too close, the handsome rancher has no trouble ignoring the gossip. But when he’s in danger of losing the land he’s put his blood, sweat and tears into maintaining, Lucian sets out to prove he’s a changed man—by claiming he’s about to settle down with his invaluable assistant, Karlee O’Malley.

Their pending nuptials may be just for show, but from the moment they kiss, the proverbial fireworks start going off in his head—and in his heart. Before long, the man who’s usually as emotional as a brick wall is tired of pretending and wants to share a real future with Karlee. With his world suddenly turned upside down, Lucian will risk losing the business and the ranch if it means holding on to the one woman worth becoming a better man for..

Meet the author - Delores Fossen
USA Today bestselling author, Delores Fossen, has sold over 70 novels with millions of copies of her books in print worldwide. She’s received the Booksellers’ Best Award, the Romantic Times Reviewers’ Choice Award and was a finalist for the prestigious Rita ®. In addition, she’s had nearly a hundred short stories and articles published in national magazines.

Lucian Granger was doubting that fun part right about now.

One second his butt was firmly anchored in the sad­dle, and his hand was gripped on the thick braided rein. The next second, no part of him was touching any­thing but air.

The bronc gelding orchestrated the hardest buck in the history of hard bucks and sent Lucian flying. Even though Lucian had been thrown before, it’d never been this hard or this high and with this kind of force behind it. His life did indeed flash before his eyes, and Lucian was pissed off that he could possibly die from a horse with no balls.

Hell’s Texas Bells. What kind of cowboy did that make him?

Lucian instantly got the answer to that question. It made him a hurt cowboy, that’s what.

First his tailbone collided with the rock-hard ground in the corral, sending up a cloud of dust. Then his shoul­der hit, the jolt of it slamming all the way to his eye sockets and rattling his teeth. Every part of his body went to full-throttle pain, and his breath was still some­where on the back of the ball-less Appaloosa named Outlaw. The horse was now smirking at Lucian with a “guess we know who won that round, don’t we?”

If the horse had actually had balls, Lucian would have removed them there on the spot.

“Boss man, that was only four seconds,” Skeeter Muldoon called out to Lucian. The ranch hand was hold­ing a stopwatch while perched atop the corral fence. “You gotta stay in the saddle a mite longer if you’re gonna win a bronc-riding buckle in the rodeo.”

Skeeter was the oldest hand they had on the Granger Ranch and was as reliable as they came, but Lucian con­sidered neutering him, too, for pointing out the obvious.

“You all right?” he heard his brother Dylan ask.

It was a simple enough question, but Lucian figured Dylan was laughing his butt off. Lucian would have been doing the same had their positions been reversed. It was their form of brotherly affection.

“I’ll live,” Lucian assured him, but when he tried to sit up, he wasn’t 100 percent certain that was true. The pain shot through him again, and that’s when he real­ized he’d dislocated his shoulder.

He didn’t have time for this. He had a meeting with a cattle buyer in an hour and appointments stacked up after that.

While Lucian was still sitting on the ground and fighting to drag in a decent breath, Dylan climbed over the corral fence and moseyed toward him. Emphasis on the moseying. Again, it was a sign of affection that Dylan wasn’t showing a whole bunch of concern.

Well, either it was affection or else Dylan was en­joying that Lucian had just had his butt busted—again.

When you were the big brother/boss, family and folks in their hometown of Wrangler’s Creek, Texas, liked tak­ing you down a notch. That was especially true when those folks—or rather, some of them, anyway—called him Lucifer. Not behind his back, either. To his face.