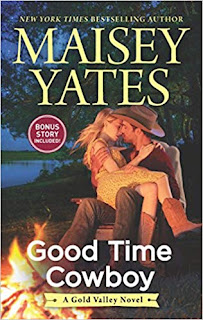 Book description
In Gold Valley, Oregon, forbidden desire just might turn into the love of a lifetime…

When Lindy Parker lost her cheating husband, she gained a vineyard. She’ll do anything for Grassroots Winery, including teaming up with the hottest devil she knows, rancher Wyatt Dodge. Wyatt is her ex’s friend and has an ego as big as the bulls he rides. But in spite of that, disciplined Lindy has always wanted him…

Lightning struck Wyatt Dodge the first time he saw Lindy Parker. But there were two problems with that: she was married to his friend, and Wyatt doesn’t do strings. But now Lindy is free, and the two of them can finally explore the heat that’s burned between them for so long. But can Lindy make this good time cowboy decide on forever?

Meet the author - Missy Yates
New York Times and USA Today Bestselling author Maisey Yates lives in rural Oregon with her three children and her husband, whose chiseled jaw and arresting features continue to make her swoon. She feels the epic trek she takes several times a day from her office to her coffee maker is a true example of her pioneer spirit.

Excerpt
“I’ve spent too many nights standing in groups of people who think that I’m beneath them. Who think I’m not as smart. Who think I don’t deserve to be standing in the spot I’m in. I want…better. I wish I didn’t care. But I can’t help it. I do.”

“It’s not a bad thing to care,” he said, taking a step toward her, close enough now that the slight breeze carried her floral perfume toward him, the impact of those flowers like a battering ram. “I wish I remembered how.” She appraised him closely, and he smiled. “Well, sometimes I wish I remembered how. A lot of times I’m happy I don’t.”

She was quiet for a breath. “You care,” she said, finally.

And for the first time, he was glad that she still had her sunglasses on. Because right about now he didn’t want to know what she saw.

It had never occurred to him until that moment that if he could read her, every movement, every minute expression, that she might be able to do the same thing with him.

“About the ranch. Remember, I’m nothing more than a bad cliché of a country song. My horse, my truck, my land.”

She stiffened. “Is there a woman?”

“In a manner of speaking,” he said, taking another step toward her, unable to help himself. “Right now, she’s not so impressed with me.”

“Well, it’s not hard to understand why.”

He appraised her for the space of three breaths. Watched as her breasts rose and fell with each one. Color stained her cheeks. She was blushing. And still, even with the sunglasses, he knew she was looking at him like she wanted him to turn to stone.

Well, hell, he was hard as stone. Had been from the moment he’d first seen her.

She’d always been there. In the back of his mind. Ever since that first moment.

Yes, he’d been with other women in the past five years. Of course he had. But the more he spent time with Lindy, the more she overtook his senses.

When she had been married to Damien it had been the gentlemanly thing to go off and sleep with other women, to do something to keep himself from fantasizing about his friend’s wife.

But, in the time since the divorce… That rationale had become a lot more difficult to maintain, seeing as she was no longer his friend’s wife. Or anyone’s wife.

Since her divorce… Yes, there had been other women.

In the past year…not so much.

And acting like it was a game. Light and funny banter… That was getting harder too. Along with the rest of his damned body.

It did. She wanted him. He could see it. And he didn’t know what the hell her investment was in acting like she didn’t. They were grown-ass adults. She didn’t want to get married, neither did he. But damn he wanted to burn off some of this electricity that sparked between them every time he saw her.

Yeah, they were working together, but in his mind, that was only making it worse. Ignoring it, continuing to go on like it wasn’t happening… That wasn’t working. Not for him.

It wasn’t going away. It wasn’t getting better. It was only getting stronger. And he didn’t know what to do with that.

He didn’t know what to do with this beautiful, gorgeous brick wall standing in front of him. One that made him crazy, one that made his skin itch and his blood feel like it was on fire.

He didn’t know how to want and not have.