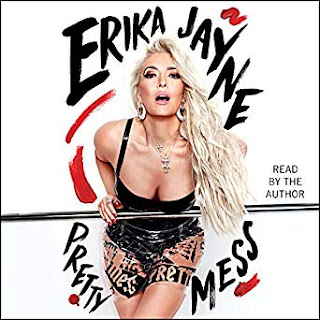 Book description
Without her alter-ego Erika Jayne, Erika Girardi says she'd just be "another rich bitch with a plane" - so get ready for the dishy, tell-all memoir from show-stopping performer, model, singer, and beloved star of The Real Housewives of Beverly Hills, Erika Jayne.

Erika Jayne didn't make it this far by holding back. Now, in her first-ever memoir, the fan favorite star of Bravo's The Real Housewives of Beverly Hills bares her heart, mind, and soul.

In Pretty Mess, Erika spills on every aspect of her life: from her rise to fame as a daring and fiery pop/dance performer and singer; to her decision to accept a role on reality television; to the ups and downs of family life (including her marriage to famed lawyer Tom Girardi, 33 years her senior). There's much more to Erika Jayne than fans see on The Real Housewives of Beverly Hills. Pretty Mess is her opportunity to dig deep and tell her many-layered, unique, and inspiring life story.

As fun and fearless as its author, this fascinating memoir proves once and for all why Erika Jayne is so beloved: she's strong, confident, genuine, and here to tell all!

Meet the author - Erika Jayne
Erika Girardi (known professionally as Erika Jayne) is an American singer, actress and television personality. Raised in Atlanta, Girardi came to prominence with the release of her debut single "Roller Coaster", which topped the US Billboard Dance Club Songs chart in 2007; it was included on her debut studio album Pretty Mess in 2009. Jayne has attained nine number-one songs on the Dance Club Songs chart as of 2016. In 2015, Girardi became a recurring cast member on the sixth season of the reality television series The Real Housewives of Beverly Hills, followed by her role on Dancing with the Stars in 2017.

My thoughts
I am a fan of all the Real Housewives shows so I was interested in this book. When I heard a friend say how good it was and she has never watched the show then I thought why not give it a try. This is the first biography of one of the housewives that I have read. Another reason I decided to give this book a chance was I remember Erika talking about the book on the show. I am glad I listened to the audiobook as I think I liked it better than reading the book. Hearing Erika read it herself was listening to a new friend chat about her story. I can see hear emotions on her face in my mind as I listened to her. Even tough I watch her show I do not  know a lot about her past. Her life was interesting from not knowing her father to doing acting/dancing while in school and all the experiences she had growing up. Her many life experiences have made her into the person she is today. At times I like her and at times she drives me a little nuts but htat is all a part of what her her. An enjoyable book.
Posted by Angela - Bookaunt at Wednesday, August 15, 2018