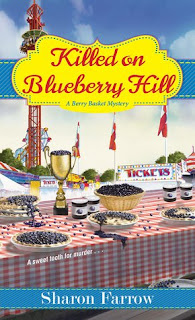 Book description
It’s peak tourist season in Oriole Point, Michigan—the blueberry buckle of the fruit belt. Nothing draws the crowds quite like their annual carnival. And nothing turns it sour faster than murder . . .

The Blueberry Blow Out festival has begun and it’s time for Marlee Jacob, owner of The Berry Basket, to shine. Unfortunately it’s also bringing out the worst in her fiancé Ryan Zeller. Ryan’s rivalry with Porter Gale, owner of Blueberry Hill Farm, spills over into a very public and very ugly fight. And after they compete in the pie-eating contest and a raucous tug of war, their orchard blood feud takes a deadly turn . . .

The death of the king of Blueberry Hill is a shock but not too surprising—he was a diabetic whose last pig out meal was deliciously fatal. But when authorities discover that someone tampered with Porter’s insulin, a tragic accident is looking like murder—and Ryan is the key ingredient. Now Marlee’s investigation to clear his name is taking her deep into the Gale family secrets, and she’s being shadowed every step of the way by a killer whose sweet revenge is just beginning . . .
Includes Berry Recipes!

Meet the author - Sharon Farrow
Sharon Farrow is also the co-author of the Agatha nominated Eliza Doolittle and Henry Higgins Mysteries written under the joint pseudonym D.E. Ireland. A freelance writer since her twenties, she has been published in mystery, fantasy, and romance; one of her short stories has been optioned for film. Sharon currently lives along the beautiful Lake Michigan shoreline where the Berry Basket series is set. Visit her online at sharonfarrowauthor.com, on Facebook @SharonFarrowAuthor, or Twitter @SharonFarrowBB.

My thoughts
I was happy to get the chance to read the next installment in the Berry Basket Series. It was fun to get to visit our old friends in this quaint little town. I kind of like how you have the old feud between the Gale and Zellar families going on as a back part of the story. It gives us a little extra. The author did a great job describing all the little details. You felt like you are part of the festival. She also likes to throw in little curves so just when you think you have it all figured out you find out you are wrong. It took me until the end to figure it all out. I am looking forward to the next book in this series.
Posted by Angela - Bookaunt at Saturday, October 27, 2018