The Last Note by Zaida Alfaro - Guest Post and Giveaway 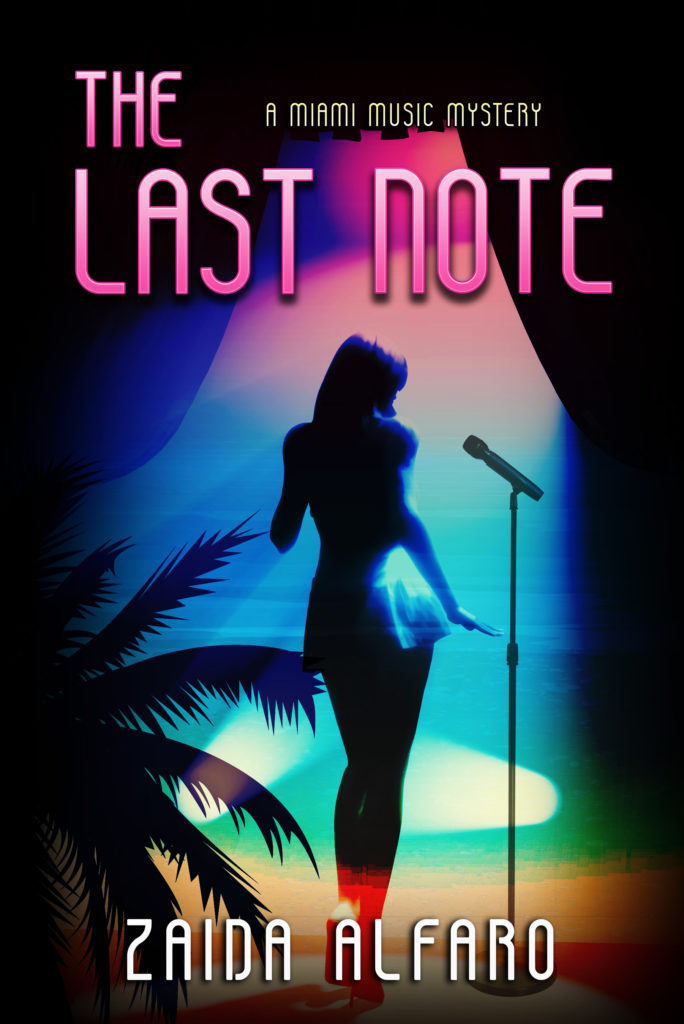 Book description
Killer songs and a killer voice, but a killer at her gig?

Vy has always found herself at the center of attention as the lead singer for one of Miami's top cover bands, but when she finds herself at the center of a murder investigation, while performing at the Steel Horse Bar, that changes the tune of the night. Someone believes that Vy knows the truth behind the murder of the bar owner Ricky, and now that person is after her. Vy better figure out quickly who wanted Ricky dead, who is threatening her with her favorite band’s song lyrics, and why she’s falling for the handsome Detective Houston, before she too sings her last note. With a mixture of mystery, mayhem and comedy, you will find yourself immersed in Vy's musical and murderous world.

Meet the author - Zaida Alfaro
The Last Note’s main backdrop, the amazing city of Miami, Florida, is beloved and well-known to me. I was born and raised in Miami, and like the novel’s main character Vy, I am a singer/songwriter, as well as the lead singer to a self-proclaimed cover band. All things relating to music or literature are my passion. I keep a journal, and I am constantly writing poems, stories, and any thought that comes to mind. I have a fascination for black and white films, that have the element of mystery. As I have been told by many, I have a very creative imagination.

Guest Post
My Musical Career
My name is Zaida (yes, Zaida is my real given name). I am named after my beautiful mother. I am the youngest of six. I was born into art. My mother is an amazing artist, composer, and musician. I remember sitting on the couch watching my mom’s fingers move graciously throughout the piano keys. It was mesmerizing for me. I learned how to play the piano from my mother when I was 12 years old. From then on my love for music began, but my love was not for the piano, my love was simply listening to the music. I would keep a journal and constantly write poems, stories, any thought that came to mind. I remember playing the piano, and trying to add my words to this unknown, unfinished melody.

My professional musical career began when I was 17 years of age. I was naive then. I was signed to an independent music label. I spent months at a recording studio trying to shape my own style. I spent most of my summers with my vocal teacher, who I grew very close to. I was taking night time classes in college, and I had a full time job. I spent the weekends and my free time singing and composing. I was trying to live my dream. There was a local hangout called The Warehouse Café. This place was like a church to me. I was there religiously after classes, almost every night. This place was filled with artists, writers, musicians, anything that had to do with the arts. One night, I sat on an old, velvet couch that faced a tiny, wooden stage. A girl, about my age, sat on a bar stool with her guitar and played her song. I remember sitting there thinking to myself that I could do that very thing she was doing. I wanted to express my life, my experiences, my thoughts to strangers. I met an amazing guitarist at The Warehouse Café. I simply asked him to teach me a few chords on the guitar. My high school friend gave me an old, beat up classical guitar (which is the only guitar I compose on to this day). With a few lessons, I started combining my own original poetry with some basic guitar melodies. That was the result of my debut album, “Train Ride” which was released in 2000.

After a few years, and learning the hard way, as an independent artist, I released an EP called “Little Box of Secrets.” I was able to produce this record the way I heard it in my mind. I am more of an adult on this record. My stories come more from my heart, as opposed to the first record, where someone else tried to capture the music. Although this musical journey has been challenging, I am not ready to stop showing the people the world through my eyes. My lyrics portray the different journeys my life has taken me through; heartache, hardships, falling in love, and happiness. I want the people to feel what I felt, to see what I have seen, and to know what I have learned. I want my music to be the window to my soul for the world to peek in. It is more than just listening to the songs; it is breathing in the words.