I Invited Her In by Adele Parks - Spotlight and Excerpt 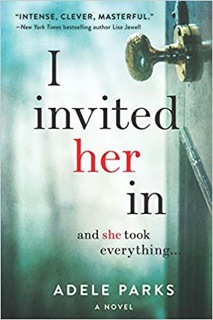 Book Description
Imagine the worst thing a friend could ever do.

When Mel receives an unexpected email from her oldest friend Abi, it brings back memories she thought she had buried forever. Their friendship belonged in the past. To those carefree days at university.

But Abi is in trouble and needs Mel’s help, and she wants a place to stay. Just for a few days, while she sorts things out. It’s the least Mel can do.

After all, friends look out for each other, don’t they?

I Invited Her In is a blistering tale of wanting what you can’t have, jealousy and revenge from Sunday Times bestseller Adele Parks.

Meet the author - Adele Parks
Adele Parks one of the most-loved and biggest-selling women’s fiction writers in the UK. She has sold over 3 million books and her work has been translated into 25 different languages.

1500+ 5 star reviews have kindly been written by her fans on Amazon.co.uk

She has published 15 novels in the past 15 years, all of which have been London Times Top Ten Bestsellers.

Adele was born in the North East of England, in 1969. She enjoyed a traditional 1970’s childhood, watching too much TV and eating convenience food because nobody minded if kids did that in those days. Since graduating from university, where she studied English Language and Literature, she worked in advertising and as a management consultant. In 2010 Adele was proud to be awarded an honorary doctorate of Letters from Teesside University.

Excerpt
Anyway, back to Abi: she did not fume that I was being ro­mantic and shortsighted, the way my very frustrated tutor did when I finally fessed up to her, nor did she cry for a month, the way my mother did. Which was, you know, awful.

She made us both a cup of tea, even went back to her room to dig out a packet of Hobnobs, kept for special occasions only. I was on my third Hobnob (already eating for two) before she asked, “So who is the dad?” Which was awkward.

“That ugly, is he?” she commented with a smile. Again, I wanted to chortle; I knew it was inappropriate. I mean, I was pregnant! But at the same time, I was nineteen and Abi was funny. “I didn’t even know that you were having sex with any­one,” she added.

“I didn’t feel the need to put out a public announcement.”

Abigail then burst into peels of girlish, hysterical giggling. “The thing is, you’ve done exactly that.”

“I suppose I have.” I gave in to a full-on cackle. It was prob­ably the hormones.

“It’s like, soon you are going to be carrying a great big plac­ard saying, I’m sexually active.”

“And careless,” I added. We couldn’t get our breath now, we were laughing so hard.

I playfully punched her in the arm. “I do know.”

“Of course you do, but if you don’t tell people who he is, that’s what they’re going to say.” She didn’t say it meanly, it was just an observation.

“Even if I tell them who the father is, they’ll call me a slag anyway.” Suddenly, it was like this was the funniest thing ever. We were bent double laughing. Which was odd, since I’d spent most of my teens carefully walking the misogynistic tightrope, avoiding being labelled a slag or frigid, and I’d actually been doing quite a good job of balancing. Until then. It really wasn’t very funny. The laughter was down to panic, probably.

The bedrooms in our student flat were tiny. When chatting, we habitually sat on the skinny single beds because the only al­ternative was a hard-backed chair that was closely associated with late-night cramming at the desk. The room that was supposed to be a sitting room had been converted into another bedroom so that we could split the rent between six, rather than five.

We collapsed back onto the bed. Lying flat now to stretch out our stomachs that were cramped with hilarity and full of bis­cuits—and in my case, baby. I looked at my best friend and felt pure love. We were in our second year at uni; it felt like we’d known one another a lifetime. Uni friendships are more intense than any other. You live, study and party together, without the omniscient, omnipresent parental influence. Uni friends are sort of friends and family rolled into one.

Abi and I met in the student union bar the very first night at Birmingham University. Although I would not describe myself as the life and soul of the party, I wasn’t a particularly shy type either; I’d already managed to strike up a conversation with a couple of geology students and while it wasn’t the most rivet­ing dialogue ever, I was getting by.

Then, Abigail walked up to me. Out of nowhere. Tall, very slim, the sort of attractive that girls and Guardian-reading boys appreciate. She had dark, chin-length, sleek, bobbed hair with a heavy, confident fringe. She was all angles, like a desk lamp, and it seemed remarkable that she was poised to shine her spot­light on me.

She shot out her hand in an assured and unfamiliar way. Waited for me to take it and shake it. In my experience, no one shook hands, except maybe men in business suits on the TV. My dad was a teacher; he sometimes wore a suit, but mostly he preferred chinos and a corduroy jacket. I suppose he must have occasionally shaken the hands of his pupils’ parents, but I’d never seen anyone my age shake anyone else’s hand. Her gesture ex­uded a huge level of jaunty individuality and somehow flagged a quirky no-nonsense approach to being alive. Her eyes were almost black. Unusual and striking.

I appreciated her directness. It was a fact that most of the con­versations I’d had up until that point hadn’t stumbled far past the obligatory exchange of this precise information. “Melanie Field. Economics and business management combined. AAB.”

She cut me off. “That means you are literally twice as clever as I am.” If she believed this to be true, it didn’t seem to bother her; she took a sip from her wine glass, winced at it.

“Or half as focused,” I said. I thought a self-deprecating quip was obligatory. Where I came from, no one liked a show-off. Being too big for your boots was frowned upon; getting above yourself was a hanging offence.

Abi pulled a funny face that said she didn’t believe me for a moment; more, that she was a bit irritated that I’d tried to be overly modest.