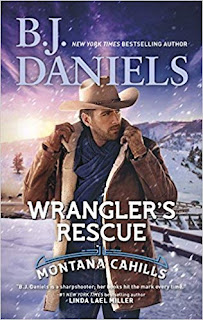 One week ago, Cyrus Cahill told Ashley Jo “AJ” Somerfield that he’d be back in her arms by the weekend. He just needed to buy a bull for his ranch, and then they’d pick up where they left off after that romantic ride through the foothills. But now he’s gone missing and everyone—even the sheriff—believes he’s dead.

Everyone…but AJ. She suspects foul play and she won’t rest until Cyrus is back home in Gilt Edge, right where he belongs. Because Cyrus isn’t the kind of cowboy who breaks a promise. And since she’s not the kind of woman who gives up on her man, AJ will risk anything to help bring him home…even her own life.

Meet the author - B.J. Daniels
NYT and USA Today Bestselling author B.J. Daniels was born in Texas but moved with her family to Montana at the age of five. Her first home was a cabin in the Gallatin Canyon and later a lake house on Hebgen Lake outside of West Yellowstone.

Excerpt
AJ couldn’t bear to hear this. She rose, excused her­self and headed toward the apartment upstairs over the Stagecoach Saloon where she’d been living. Gigi was upstairs packing to leave as she walked in.

Her friend dropped what she was doing and hugged her. “I’m so sorry. I know you cared about him.”

She’d had a crush on him for months. But in the weeks before he’d left, she’d fallen in love with him. From the beginning, she’d sensed something special between them. She hadn’t imagined that any more than she was imagining he was still alive. She felt it, heart deep.

“I know that look,” Gigi said, holding her at arm’s length to search her gaze. “What are you planning to do?”

“It’s just this feeling that I can’t shake.”

“If they call off the search, I have to go look for him.”

Gigi’s eyes widened. “In the entire Caribbean? Do you have any idea how long that could take?”

She shrugged. “Good thing I’m rich, huh, and have plenty of time.” She and Gigi both had come from wealthy families. She could live on the trust fund her grandmother had set up for her and never need to work a day in her life. Not that she’d ever considered it. She enjoyed working and making her own money. She had never touched a cent of the trust fund. But she would now if she had to.

“What about your job?” her friend asked.

“Darby will either give me the time off or accept my resignation.”

“I wasn’t referring to your bartending job, AJ,” Gigi said impatiently. “You’re a high-powered attorney and your father expects you to join the family business when you’re done doing your thing here.”

“I was a high-powered attorney. And I’ve told you, I don’t want to work for the family business. It isn’t where I belong.”

“Your father might disagree,” her friend pointed out. Gigi had met him so she knew how determined AJ’s father could be.

“You know, I was never going back. I wanted to stay here.” Her voice broke.

She shook her head. “I wouldn’t be feeling the way I do if he was dead. I’m going to find him. As long as it takes. I have to find him. He’s alive and—”

“Wouldn’t we have heard from him if he was alive? If he’d been rescued?”

“Maybe not. Maybe he’s somewhere where he can’t get word out. I just know that I have to look for him. If I did nothing…” AJ shook her head. “I would never forgive myself.”

“Gigi, you have employees waiting for you to get your restaurant open again.” A fire in the building where Gigi had her Houston restaurant had caused fire and water damage. Now that the remodeling was underway it wouldn’t be long before Gigi could get her business going again and her employees back to work. She shook her head. “I appreciate your offer, but I have to do this myself.”

“Promise that you’ll wait and give the trained per­sonnel a chance to find him before you do anything rash.”

AJ smiled at her friend. “Me, do anything rash? That is so not like me.”