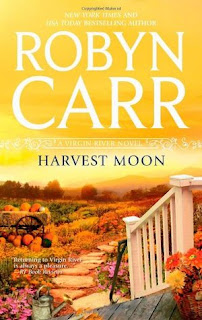 Book description
Rising sous-chef Kelly Matlock's sudden collapse at work is a wake-up call. Disillusioned and burned out, she's retreated to her sister Jillian's house in Virgin River to rest and reevaluate.

Puttering in Jill's garden and cooking with her heirloom vegetables is wonderful, but Virgin River is a far cry from San Francisco. Kelly's starting to feel a little too unmotivated…until she meets Lief Holbrook. The handsome widower looks more like a lumberjack than a sophisticated screenwriter—a combination Kelly finds irresistible. But less appealing is Lief's rebellious stepdaughter, Courtney. She's the reason they moved from L.A., but Courtney's finding plenty of trouble even in Virgin River.

Kelly's never fallen for a guy with such serious baggage, but some things are worth fighting for. Besides, a bratty teenager can't be any worse than a histrionic chef…right?

Meet the author - Robyn Carr
Robyn Carr is a RITA® Award-winning, eleven-time #1 New York Times bestselling author of almost sixty novels, including the critically acclaimed Virgin River series. The third novel (THE FAMILY GATHERING) in her fan-favorite new series, Sullivan's Crossing, will be released in April 2018. Robyn is a recipient of the Romance Writers of America Nora Roberts Lifetime Achievement Award 2016 and in 2017, VIRGIN RIVER was named one of the HarperCollins 200 Iconic Books of the past 200 years. Robyn and her husband live in Las Vegas, Nevada. You can visit Robyn Carr's website at www.RobynCarr.com.

My thoughts
Another great Virgin River book. This series never seems to get old for me. I could not help but feel bad for Kelly after what happened to her. She falls in love with her boss but because he was married she know he was out of reach and then his wife came after her with lies. I thing the best that could have happened was when Kelly went to stay with her sister. Then there was poor Courtney, she was a young girl who had been through so much but did not know how to deal with all the bad things that came her way. I liked how Kelly did not pressure Courtney into liking her but let nature take its course. I am looking forward to the next book in this series to see who we get to meet next.
Posted by Angela - Bookaunt at Saturday, December 08, 2018