The King Who Disappeard by Hank Quense - Spotlight and Giveaway 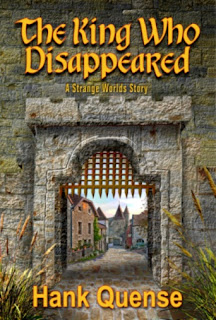 Book description
Do you sometimes wonder what it would be like to live in a castle during the era of knights and dragons? Well, join me today as author Hank Quense visits to tell us about his latest fantasy release, THE KING WHO DISAPPEARED.

Be sure to check out the giveaway at the bottom of the post. The author is giving away two print copies (US only) of his book and three eBook copies.

Here’s a synopsis of the book:

Bohan, a king, is at war with Jerado, an evil wizard who controls four neighboring kingdoms. Bohan, his wizard, Ansgar, and his guards are trapped in a cave by Jerado who magically seals the cave. Ansgar casts a sleep spell on all of them. It will last until the cave is unsealed.

More than 200 years later, an earthquake unseals the cave and frees Bohan. While catching up on history, he learns Jerado is still alive and rules the country as dictator. Bohan learns this from a sympathetic constable named Leticia. After talking to Bohan and his guards, she recognizes him from school lessons as the King Who Disappeared. Bohan determines to go to the capital, Dun Hythe, and gain revenge. Leticia promises to go with him to find out what happened to her father who was arrested and disappeared.

Jerado learns that Bohan is still alive and headed to confront him. He tells Lithgow, his son, and Flavia, his daughter about Bohan. Lithgow is the War Minister and Flavia the Minister of the Interior. They hate each other and each plans to succeed their father when he retires.

Jerado orders Lithgow to use his soldiers to block and kill Bohan. Flavia, who also has troops, decides to kill Bohan before Lithgow can. Bohan and his guards, all heroes, brush past Flavia’s soldiers and route Lithgow’s. Jerado now orders Lithgow’s troops to seal all the city’s gates and search everyone entering the city.

Meanwhile the citizens in Dun Hythe are suffering from Jerado’s rule and from Flavia’s imposition of lower wages to raise profits for the many businesses she controls. The wage restrictions impact on the Godmother’s bottom line. She is the head of a crime family who controls all vice in the city. She is also the head of the two largest and most powerful labor guilds, the teamsters and the dock workers. With Flavia’s wage restrictions in place the citizenry does have any money to have fun in the Godmother’s saloons or gambling halls. Also the workers don’t make enough money to feed their families.

Jerado’s Treasurer, Maurice, learns a few of Jerado’s family secrets. He knows how Flavia embezzles vast amounts of money from the contracts she gives out. Maurice learns about Bohan and the attempts to kill him. These and a few other secrets ensure his early death if Jerado ever finds out what he knows. Maurice meets with the Godmother and they agree to help each other for their mutual protection.

Within the city, rumors swirl about the reappearance of the King Who Disappeared. The Godmother ignores the rumors and is stunned to learn from Leticia that Bohan is really alive and outside the city. After a lively discussion, The Godmother agrees to smuggle Bohan into the city in return for a guarantee from Bohan for protection for her business.

Bohan and his mates enter the city by boat in the middle of the night and meet with the Godmother and Maurice who tells Bohan the layout of the palace and how to sneak into it. To make a distraction, the Godmother will call a city-wide general strike to coincide with Bohan’s attack on Jerado.

Bohan and Ansgar sneak into the palace at night with Maurice in the lead. Leaving Maurice behind, they advance into the living quarters and confront Jerado. A confusing battle ensues as the two wizards throw spells at each other. Using Ansgar’s spell as a distraction, Bohan gets close enough to Jerado to use his sword on the wizard thus gaining revenge.

With Jerado out of the way, Bohan arrests Lithgow and Flavia, proclaims himself king and agrees to work with the Godmother, orders a wage increase for all the workers.

Everyone is happy except Jerado’s children who must perform menial work for the rest of their lives.

Meet the author - Hank Quense
Now for those of you unfamiliar with the author, here’s a bit of background on him.

Hank Quense writes humorous and satiric sci-fi and fantasy stories. He also writes and lectures about fiction writing and self-publishing. He has published 19 books and 50 short stories along with dozens of articles. He often lectures on fiction writing and publishing and has a series of guides covering the basics on each subject.

He and his wife, Pat, usually vacation in another galaxy or parallel universe. They also time travel occasionally when Hank is searching for new story ideas.

Thanks for stopping by today during Hank’s visit. Have you ever made up stories about wizards and kingdoms?

Giveaway
Author Hank Quense is giving away two print copies (US only) of THE KING WHO DISAPPEARED and three eBook copies. Click on the Rafflecopter widget below and follow the instruction to enter to win. If the widget doesn’t show up, just check HERE.

a Rafflecopter giveaway
Posted by Angela - Bookaunt at Monday, April 15, 2019