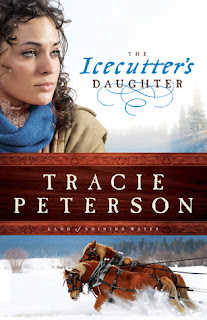 Title: The Icecutter's Daughter by Tracie Peterson (Land of the Shining Water #1)
Author: Tracie Peterson
Type: Trade paperback
Genre: Christian Fiction
ISBN: 9780764206191
Synopsis: As the lone female in a houseful of men, Merrill Krause dedicates her life to caring for her family and their business, as her dying mother asked. Besides, it suits her; she's never felt like she fits what most people expect in a girl--she'd rather work with her father's horses and assist with the ice harvest. And though she's been mostly content up to this point, a part of her wonders if there will ever be anyone who will notice her amid the bevy of brothers determined to protect her from any possible suitors.
When Rurik Jorgenson arrives in their small Minnesota town to join his uncle's carpentry business, he soon crosses paths with Merrill. But unlike other men, who are often frightened away by her older brothers, Rurik isn't intimidated by them or by Merrill's strength and lack of femininity. The attraction between them begins to build...until Rurik's former fiance shows up with wild claims that bring serious consequences to Rurik.
Can Rurik and Merrill learn to trust God--and each other--when scandal threatens their newfound love?

My Review: This is the first book in a new series by Tracie. In this book we learn about Merrill who has been taking care of her father and brothers since her mother's passing. Next comes Rurick, he has moved to town to learn to be a carpenter like his uncle. Can Merrill learn to love Rurick or will his past get in the way? As with other books I have read by Tracie in the past this book did not disappoint. I love the historical aspect of this book and that we get a little of the history of ice cutting along with the story of two people that thanks to the author are easy to fall in love with. I think the author die a good job of showing how relationships between the characters progressed. I feel a sense of my own history being told here even thought I can't say we had icecutters in our family but my family settled in the Midwest. Tracie also does a nice joy of adding the faith each of the characters have into the story. I look forward to the next book in this series. I received this book from Bethany House in exchange for a fair and honest review. I give this book 5 stars.