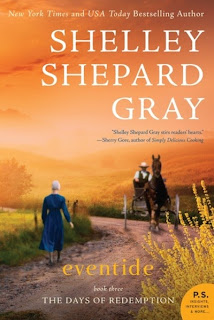 
Synopsis:   A young Amish woman harbors a difficult secret. Does she dare share the truth with the man she hopes to marry?
Elsie Keim doesn't want to be left behind. Her twin sister, Viola, and her older brother, Roman, have both found love and are building lives of their own. But Elsie? She's still stuck at home, being treated like a child. No one seems to consider her a capable woman-all they see are the thick lenses of her glasses, constant reminders that Elsie suffers from keratoconus and is slowly going blind.
Elsie knows there's much more to her than her disease. That's why when a new neighbor, Landon Troyer, shows some interest in her, she doesn't want anything to scare him away . . . even if it means keeping her condition a secret.
Landon is ready to start a new life and feels like Elsie may just be the right woman to start it with. But when Roman steps in and shares the truth about Elsie's illness, Landon is floored. His job is demanding and takes him away from home, sometimes for days at a time. How could he keep up with his responsibilities and take care of Elsie?

My review: Eventide is the last book in the Days of Redemption series and does a very good job of wrapping up the series as a whole. I felt so bad for Elsie throughout this book. Even though she is a strong women I felt as her struggles with her illness were sad as well as the the way her family felt about her illness and all she wants is to be normal, have a man love her and have a family. I feel Shelley did such a great job developing this character that you can't help but love her. This whole story is full of so many emotions but such a good read that you will read it all in one weekend. I think you should check out the whole series and connect with each of the characters and don't forget to check out the bonus pages in the back of the book.

9/12/2013
Kendra | Happily Managing a Household of Boys
Laurel | From Snowflakes To Hotcakes, with Bits of Grace
Charity | Giveaway Lady
Tina | GivingNSharing
Angela | Griperang's Bookmarks
Megan | When life gets you down, read a book
Linda | Mocha with Linda

Shelley Shepard Gray is celebrating the release of the final book in The Days of Redemption series, Eventide, by giving away FIVE sets of the series.

Five winners will receive:
Enter today by clicking one of the icons below. But hurry, the giveaway ends on September 21st. All winners will be announced September 23rd at Shelley's blog.

Don't miss a moment of the fun; enter today and be sure to visit Shelley's blog on the 23rd to see if you won one of the book sets!