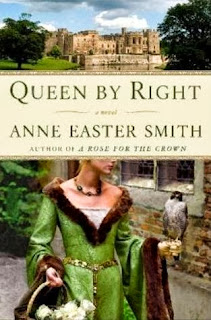 Synopsis: Anne Easter Smith's novels are beloved by reader or their ability "to grab you, sweep you along with the story, and make you fall in love with the characters." In Cecily Neville, duchess of York and ancestor of every English monarch to the present day, she has found her most engrossing character yet.
History remembers Cecily of York standing on the steps of the Market Cross at Ludlow, facing an attacking army while holding the hands of her two young sons. Queen by Right reveals how she came to step into her destiny, beginning with her marriage to Richard, duke of York, whom she meets when she is eight and he is twelve. Raised together in her father's household, they become a true love match and together face personal tragedies, pivotal events of history, and deadly political intrigue. All of England knows that Richard has a clear claim to the throne, and when King Henry VI becomes unfit to rule, Cecily must put aside her hopes and fears and help her husband decide what is right for their family and their country. Queen by Right marks Anne Easter Smith's greatest achievement, a book that ever fan of sweeping, exquisitely detailed fiction will devour.

My review: This book has been on my shelf for a few years now and I knew one day I would read it. Well a couple of ladies from my book club wanted to read it too so off we went to read it. This book was set in one of my favorite times periods that I enjoying reading about and learning more about. With that being said yes I did enjoy the book. I learned a lot about Cecily of York that I did not know, in fact I am not sure I knew who she was before I read this. What a very strong proud woman she was. Cecily endured a lot of sadness in her life with the loss of so many of her babies, but she kept her head held high. Richard and Cecily had such a love for each other which started out as a friendship when Richard came to live with her father. The friendship turned love was a rare thing in this time period as many if not most marriages of royalty was made for position not love. When Cecily lost Richard you just wanted to reach in an give her a big hug. Cecily was also lucky enough to have a very close friend and confidant in Constance which was her doctor. We were also able to see a soft side to Cecily when Piers (I think that was his name I have a horrible memory) jumped her and stole her ring but they caught him, she wanted to help him not punish him and he became a very loyal servant because of her kindness. I believe Cecily had a very level head on her shoulders and was able to help her husband in his life because of this, I am not sure her husband would have been who he was without her. Another thing that intrigued me was the addition of Joan of Arc in the story. This part could not have been left out though as it was a major part of Cecily's life and affected her for the rest of her life. I now want to read more about her as well as she sounds like a very interesting woman - more so than just the story she is famous for. Cecily was able to live long enough to see her son Edward find the thrown as Joan predicted she would. I don't know that Cecily thought anyone in her family would be king but she was happy when it happened. One more thing that I loved was the name given to Cecily - Proud Cis, she learned to not show her emotion in public and always held her head high and because of that she earned her nickname and people looked up to her and loved her. All in all a very good read for me even though the book was a large book to read, I don't think that anything could have been left out.
Posted by Angela - Bookaunt at Sunday, September 29, 2013