A Divided Inheritance by Deborah Swift 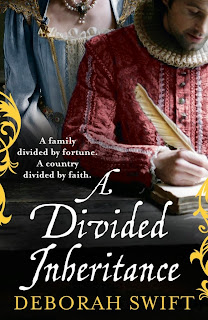 Synposis: A family divided by fortune. A country divided by faith.
London 1609...Elspet Leviston’s greatest ambition is to continue the success of her father Nathaniel’s lace business. But her dreams are thrown into turmoil with the arrival of her mysterious cousin Zachary Deane – who has his own designs on Leviston’s Lace.Zachary is a dedicated swordsman with a secret past that seems to invite trouble. So Nathaniel sends him on a Grand Tour, away from the distractions of Jacobean London. Elspet believes herself to be free of her hot-headed relative but when Nathaniel dies her fortunes change dramatically. She is forced to leave her beloved home and go in search of Zachary - determined to claim back from him the inheritance that is rightfully hers.Under the searing Spanish sun, Elspet and Zachary become locked in a battle of wills. But these are dangerous times and they are soon embroiled in the roar and sweep of something far more threatening, sending them both on an unexpected journey of discovery which finally unlocks the true meaning of family . . A Divided Inheritance is a breathtaking adventure set in London just after the Gunpowder Plot and in the bustling courtyards of Golden Age Seville.

My Review: I enjoyed how the author made me feel a part of this book as if I was in London in 1609. I could almost hear all the noise on the city streets as well as being a part of a religious war in Spain. This book gave me another look in London at this time not the kings and queens I am used to reading about, it was nice to read about "everyday" people and how they lived. I felt bad for Elspet after Zachary showed up and I did not like him at all. Can you imagine some stranger showing up "claiming" he is your father's long lost son and your father believing him and then leaving everything to him after you worked so hard to help your father keep the business going. I think the author did a great job in developing the characters so you could really "see" who they are. The descriptions in this book are very good as well as the historical detail, which to me helps me envision the whole story even more. I also liked the action and mystery in the story, it kept the book moving along. If you are a fan of historical fiction then this book is for you. An absolute keeper in my book.

About the AuthorDeborah Swift used to work in the theatre and at the BBC as a set and costume designer, before studying for an MA in Creative Writing in 2007. She lives in a beautiful area of Lancashire near the Lake District National Park.  She is the author of The Lady’s Slipper and is a member of the Historical Writers Association, the Historical Novel Society, and the Romantic Novelists Association.For more information, please visit Deborah's website. You can also find her on Facebook and Twitter.