Dance for a Dead Princess by Deborah Hawkins 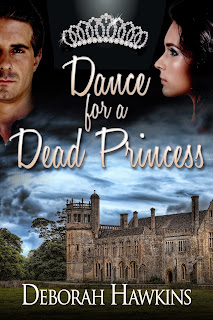 Synopsis: In January 1997, Princess Diana received a phone call telling her she would be assassinated. She recorded the information on a secret video tape, naming her killer and gave it to a trusted friend in America for safekeeping. It has never been found.
Diana's close friend, Nicholas Carey, the 18th Duke of Burnham and second richest man in England, has vowed to find the tape and expose her killer. After years of searching, he discovers Diana gave the tape to British socialite Mari Cuniff, who died in New York under mysterious circumstances. He believes Wall Street attorney Taylor Collins, the executor of Mari's estate, has possession of it. He lures Taylor to England by promising to sell his ancestral home in Kent, Burnham Abbey, to one of her clients, a boarding school for American girls. Nicholas has dated actresses and models since the death of his wife, ten years earlier, and has no interest in falling in love again. But he is immediately and unexpectedly overwhelmed with feelings for Taylor at their first meeting.Taylor, unaware that Diana's tape is in her long-time friend and client's estate and nursing her hurt over her broken engagement to a fellow attorney in her firm, brands Nicholas supremely spoiled and selfish. She is in a hurry to finish the sale of the Abbey and return to New York. But while working in the Abbey's library, Taylor uncovers the diary of Thomas Carey, a knight at the court of Henry VIII and the first Duke of Burnham. As she reads Thomas' agonizing struggle to save the love of his life and the mother of his child from being forced to become Henry's mistress, she begins to see Nicholas in a new light as he battles to save his sixteen-year-old ward Lucy, who is desperately unhappy and addicted to cocaine. But just as Taylor's feelings for Nicholas become clear and at the moment she realizes she is in possession of Diana's voice from the grave, she learns that Nicholas may be Lucy's father and responsible for his wife's death at the Abbey at the time of Lucy's birth. When Nicholas is arrested for Lucy's murder and taken to Wandsworth Prison, Taylor sets out to learn the truth about Nicholas, his late wife, and the death of the Princess of Wales. Dance for A Dead Princess is a the story of two great loves that created and preserved a family that has lasted for five hundred years

My review: I chose to read this book as I have always been intrigued by Princess Diana, so I wanted to give this book a try.  I thought it was very interesting the way the author used the Princess in a mystery book. Another thing I enjoyed about this book is that it has both mystery and romance. This book is not just about Diana's death it is so much more as the story of Taylor and Nicholas are the bones of this story. I almost forgot to say that I enjoyed how the author tied historical events into the story and it made sense. This was the first book by this author and I look forward to more by her. I highly recommend this book to fans of history and mystery as well as romance.
Posted by Angela - Bookaunt at Wednesday, November 13, 2013