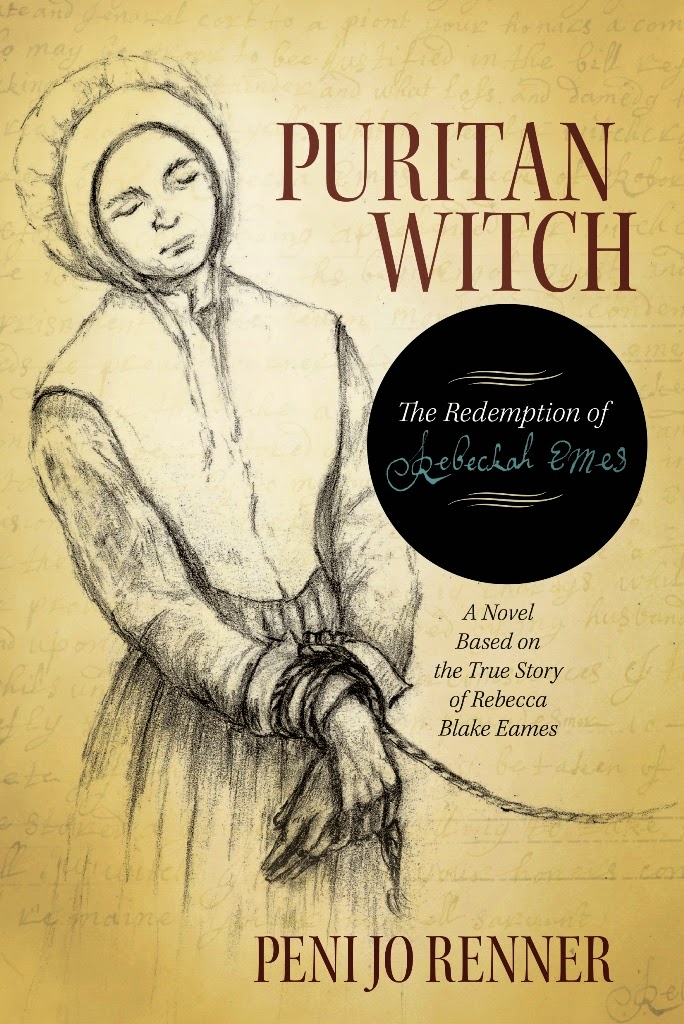 PURITAN WITCH: THE REDEMPTION OF REBECCA EAMES is a fictionalized account of one Puritan family’s ordeal during the witchcraft hysteria of colonial Massachusetts. When Rebecca Eames makes one careless utterance during a verbal attack on her family, she is falsely accused of witchcraft. After her fate is decided by three magistrates, Rebecca must endure a prison sentence during which she and her fellow captives have no choice but to valiantly struggle to find humanity and camaraderie among dire conditions.
Peni Jo Renner is the direct descendant of Rebecca Blake Eames, one of over 150 innocent people accused of witchcraft during the infamous Salem witch trials of 1692. Rebecca Eames is her ninth great-grandmother.
About Puritan Witch

On a cold night in 1692, two young girls are caught up in the divining games of a slave woman-and then begin to act very strangely when the game goes wrong. Suddenly, Salem Village is turned upside down as everyone fears that witches may be involved. Six months later, as news of the girls' strange behavior becomes known, fear and suspicion overwhelm a nearby farming community, pitting neighbors against neighbors and turning friends into enemies. When Rebecca Eames makes one careless utterance during a verbal attack on her family, she is falsely accused of witchcraft. After her fate is decided by three magistrates, Rebecca must endure a prison sentence during which she and her fellow captives have no choice but to valiantly struggle to find humanity and camaraderie among dire conditions. In this novel based on a true story, a woman wrongly imprisoned during the seventeenth-century witchcraft trials comes full circle where she must determine if she can somehow resume her life, despite all she has endured.

Praise for Puritan Witch: The Redemption of Rebecca Eames

"Puritan Witch: The Redemption of Rebecca Eames is a story of the fear, suspicion, and accusations as they permeate the surrounding communities. The narration was exquisite, really painting a picture in my head and bringing to life the language of the Puritans much better than it usually is done. I loved that it was based on a true story and that the story really expands on a piece of the darkest of American history. Such a cool read!" - Katelyn Hensel, Readers' Favorite

“Elegantly written, meticulously researched, and historically accurate, the author’s work rings true. … Renner’s vast talent as a writer is enhanced by the fact that she’s telling the story of her own family, completely captivating from beginning to end.” - Kelly Z. Conrad, award-winning author of Shaman

“In the colonial-era tale Puritan Witch, the plight of Rebecca Eames and her family plays out against the backdrop of one of the most intriguing periods in American history.” - Julie Castillo, writer and editor

Peni Renner is the author of "Puritan Witch: The Redemption of Rebecca Eames", an award-winning historical novel based on the true-life account of Peni's 9th great grandmother.  The book is Renner's first published work, and follows Eames' life and struggles in 1692 Massachussetts during the Salem Witchcraft Trials.

Writing historical fiction has always been a lifelong dream of mine. I was discouraged for many years after receiving multiple rejection slips, and turned to other creative outlets like crocheting, quilting and cross-stitch for many years. Then I met a 3rd cousin of mine online who is also into geneology and history. She told me we shared a common ancestor who was involved in the Salem Witchcraft Hysteria of 1692, and her story had never been told. My love of writing was rekindled and I began to research this ancestor, Rebecca Blake Eames. In August of 2012 I had the privilege of visiting her grave in Boxford, Massachusetts.

After months and months of research, writing, rewriting and revising, Puritan Witch came into being, featuring a lovely sketch done by my sister-in-law, Jane Sisk.

I have several other story ideas I am working on at the moment, all pertaining to interesting ancestors my 3rd cousin has introduced me to.

Please go to Historical Fiction Virtual Booktours (click here) to click on the links for each stop on the tour.


Review & Giveaway at Closed the Cover


Review at Oh, For the Hook of a Book
Book Blast at Historical Fiction Obsession


Interview at Oh, For the Hook of a Book
Book Blast at Caroline Wilson Writes


Book Blast at I’d Rather Be Reading


Review at Just One More Chapter


Book Blast at Curling Up with a Good Book


Review at A Bibliotaph’s Reviews
Review at Impressions in Ink


Book Blast at So Many Books, So Little Time


Review at History From a Woman’s Perspective


Review at WTF Are You Reading?
Guest Post at Layered Pages