The Collector of Dying Breaths by M.J. Rose 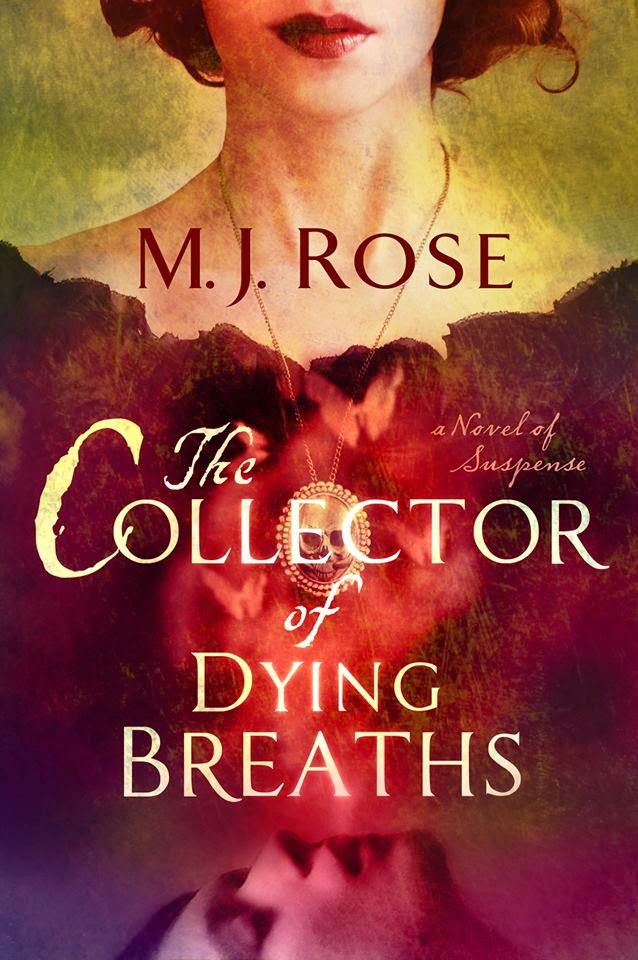 Synopsis: From one of America’s most imaginative storytellers comes a passionate tale of love and treachery, spanning the days of Catherine de Medici’s court to the twenty-first century and starring a woman drawn back, time and again, to the past.

In 1533, an Italian orphan with an uncanny knack for creating fragrance is plucked from poverty to become Catherine de Medici’s perfumer. To repay his debt, over the years René le Florentine is occasionally called upon to put his vast knowledge to a darker purpose: the creation of deadly poisons used to dispatch the Queen’s rivals.

But it’s René’s other passion—a desire to reanimate a human breath, to bring back the lives of the two people whose deaths have devastated him—that incites a dangerous treasure hunt five centuries later. That’s when Jac L’Etoile—suffering from a heartache of her own—becomes obsessed with the possibility of unlocking Rene’s secret to immortality.
Soon Jac’s search reconnects her with Griffin North, a man she’s loved her entire life. Together they confront an eccentric heiress whose art collection rivals many museums and who is determined to keep her treasures close at hand, not just in this life but in her next.

Set in the forest of Fontainebleau, crisscrossing the lines between the past and the present, M.J. Rose has written a mesmerizing tale of passion and obsession. This is a gothic tale perfect for fans of Anne Rice, Deborah Harkness, and Diana Galbadon.

My review: As with the rest of this series I was drawn in from page one. I liked how there was time travel, history and mystery all rolled into one. MJ did such a good job with this story that at times I could not tell if I was in the past or the present. She always does such a good job with the details she puts into stories from descriptions of places to history to great characters and including the scents that you can almost smell as you are reading. How MJ tells the story of perfumers was very interesting to me and I enjoyed learning as I was reading. The fact that this book is set in 16th century France was a bonus for me. If you are a lover of time travel or historical fiction books you will enjoy this book. Also I want to point out that you did not have to read the others in this series to enjoy this book, it works well as a stand alone.


Praise for The Collector of Dying Breaths

M.J. Rose is the international best selling author of fourteen novels and two non-fiction books on marketing. Her fiction and non-fiction has appeared in many magazines and reviews including Oprah Magazine. She has been featured in the New York Times, Newsweek, Time, USA Today and on the Today Show, and NPR radio. Rose graduated from Syracuse University, spent the ’80s in advertising, has a commercial in the Museum of Modern Art in NYC and since 2005 has run the first marketing company for authors – Authorbuzz.com. The television series PAST LIFE, was based on Rose’s novels in the Renincarnationist series. She is one of the founding board members of International Thriller Writers and runs the blog- Buzz, Balls & Hype. She is also the co-founder of Peroozal.com and BookTrib.com.
Rose lives in CT with her husband the musician and composer, Doug Scofield, and their very spoiled and often photographed dog, Winka.
For more information on M.J. Rose and her novels, please visit her website. You can also find her on Facebook, Twitter and Goodreads.

"It is with irony now, forty years later, to think that if I had not been called a
murderer on the most frightening night of my life, there might not be any perfume
in Paris today. And that scent—to which I gave my all and which gave me all the
power and riches I could have hoped for—is at the heart of why now it is I who call
myself a murderer."

From The Collector of Dying Breaths

"Smell is a word, perfume is literature."
—Jean-Claude Ellena, perfumer to Hermès