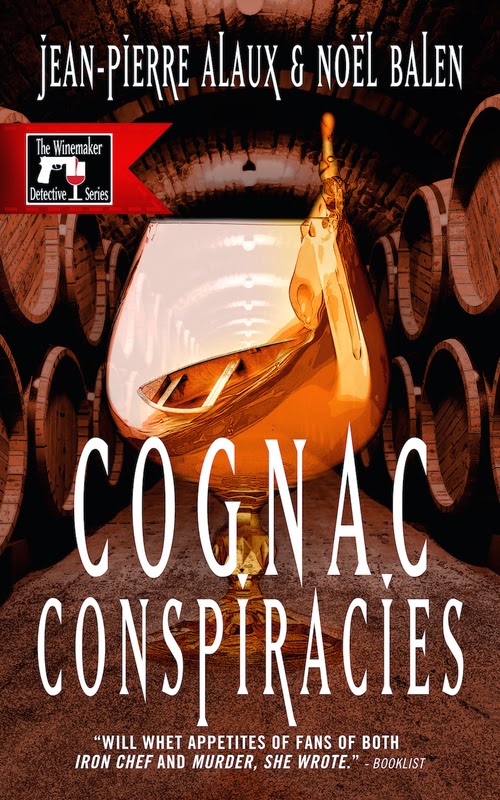 Synopsis: The heirs to one of the oldest Cognac estates in France face a hostile takeover by foreign investors. Renowned wine expert Benjamin Cooker is called in to audit the books. In what he thought was a sleepy provincial town, he is stonewalled, crosses paths with his first love, and stands up to high-level state officials keen on controlling the buyout. Meanwhile, irresistible Virgile mingles with the local population until a drowning changes the stakes. [provided by the publisher]

An episode in a long successful French mysteries seriesthat is a hit television series now in its fourth season and attracting an audience of over 4 million. The series is a huge success in France, Belgium and Switzerland.

My review: This is the first book in this series that I have read and I did enjoy it. I was able to read this without reading the previous books but now I want to go back and read the rest of them. One of the things I enjoyed reading in this book is the history of Cognac and the making of it. I thought the characters were interesting and like getting to know them. The story kept me going and I was not able to solve the mystery until the end which for me makes a good mystery. The author also did a good job of describing the setting so you felt as if you are a part of the story. I wish I could see the tv series that the book is from as I think it would be a nice show to watch. If you are a fan of mysteries or books set in France then I recommend this book to you.

The authors of the Winemaker Detective series, are Epicures
Jean-Pierre Alaux is a magazine, radio and TV journalist
when he is not writing novels in southwestern France.
He is the grandson of a winemaker
and exhibits a real passion for wine and wine making.
For him, there is no greater common denominator than wine.
He gets a sparkle in his eye when he talks about the Winemaker Detective,
which he coauthors with Noël Balen.
Noël lives in Paris, where he shares his time between writing,
making records, and lecturing on music.
He plays bass, is a music critic and has authored a number of books
about musicians in addition to his novel and short-story writing.

Translator Sally Pane studied French at State University of New York Oswego and the Sorbonne before receiving her Masters Degree in French Literature from the University of Colorado where she wrote Camus and the Americas: A Thematic Analysis of Three Works Based on His Journaux de Voyage.  Her career includes more than twenty years of translating and teaching French and Italian at Berlitz and at Colorado University Boulder.  She has worked in scientific, legal and literary translation; her literary translations include Operatic Arias; Singers Edition, and Reality and the Untheorizable by Clément Rosset.  She also served as the interpreter for the government cabinet of Rwanda and translated for Dian Fossey’s Digit Fund. In addition to her passion for French, she has studied Italian at Colorado University, in Rome and in Siena.  She lives in Boulder, Colorado with her husband.
***
Follow Le French Book on Twitter  | on Facebook
Sign up to receive their latest news and deals.
Buy the book | on Indiebound | Amazon | on Barnes & Noble 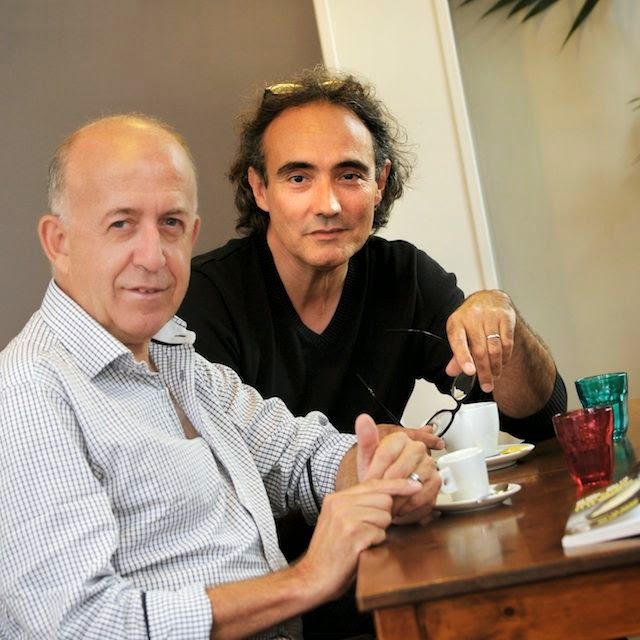 Marie-France, on the other hand, had gone straight to her father’s office, where all decisions pertaining to Lavoisier Cognacs were made. An insipid watercolor of the patriarch overlooked a morass of paperwork piled around an opaline lamp and over an old Creys inkwell. The heiress slipped her hand under the papers and searched for the letter opener. Finding the ridiculous dagger, she fondled it for a few minutes before deciding to open the day’s mail: an order from an important London restaurant that had been a faithful client of Lavoisier Cognacs for two generations, a check for a paltry amount, a customs circular, two or three advertisements, a utility bill, the latest issue of Connaissance des arts—that would be for Pierre—and two letters from Hong Kong. Marie-France could guess the contents and already dreaded them. She quickly and angrily slid the blade under the fold of the envelope and pulled out the correspondence.

The letter was from a Shiyi Cheng. It politely but firmly informed her that he was now a Lavoisier Cognacs board member. He was requesting a shareholders meeting within the month to provide the “Lavoisier company with the tools necessary to place it quickly among the most distinguished in the Asian market.” The final paragraph stated that the Chinese investment group had hired the firm Cooker & Co. of Bordeaux to audit the business in order to “maximize the potential of Lavoisier Cognacs in a fiercely competitive environment.” Cheng ended with best wishes and a pledge of his “full attention.”

The second letter was from the same barrel. It was addressed to Pierre Lavoisier, Château de Floyras, Rue des Chabannes, 16200 Jarnac. Marie-France looked at it for some time, then grabbed the vintage lighter that her revered father had used for his big Cuban cigars. It looked like a flintlock pistol. She pulled the lighter’s trigger a few times before picking up the envelope and allowing the blue flame to reduce the superficially courteous wishes of the invading party to ashes. What a mess Claude-Henri had gotten them into! Why hadn’t she slapped him when he murmured, all gussied up in his three-piece suit, “At any rate, I’m a third wheel here.” Then he had left through the servants’ door that opened onto a mossy stairway to the yard. His footsteps had dissolved under the crunch of gravel. The gate had groaned, and a car had taken off at full speed. Had a taxi been awaiting him? Claude-Henri had left his ’57 Cadillac Eldorado Brougham in the old stables. If he returned one day, she would make him pay dearly for this betrayal. How could they be related?

Marie-France collected herself after this surge of anger. She would fight tooth and nail.

Sunday, February 8
Review + Excerpt + Giveaway at Hook of a Book

Friday, February 13
Review + Giveaway at I Am, Indeed