Night is the Hunter by Steven Gore 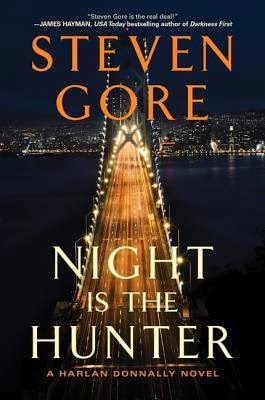 Synopsis: They call it pulling the trigger. Not by a killer in the night, but by a judge on the bench.
Twenty years ago, Judge Ray McMullin proved to the people of San Francisco he could pull that trigger by sentencing Israel Dominguez to death for a gangland murder. But it meant suppressing his own doubts about whether the punishment really did fit the crime. As the execution date nears, the conscience-wracked judge confesses his unease to former homicide detective Harlan Donnally on a riverbank in far Northern California. And after immersing himself in the Norteño and Sureño gang wars that left trails of bullets and blood crisscrossing the state and in the betrayals of both cops and crooks alike, Donnally is forced to question not only whether the penalty was undeserved, but the conviction itself. Soon those doubts and questions double back, for in the aging judge's panic, in his lapses of memory and in his confusions, Donnally begins to wonder whether he's chasing facts of the case or just phantoms of a failing mind. But there's no turning back, for the edge of night is fast closing in on Dominguez, on McMullin, and on Donnally himself.

My review; This is the first book I have read by this author and I thought it was a good book. The character development was very good in this book. Donnally is not sure if he is really following facts or not as the Judge is starting to lose his memory but he keeps on looking. This is a deep mystery that will keep you turning the pages. There are a lot of details in this book to keep you wondering what is going to happen next. I recommend this book for someone looking for a thriller/mystery book.
Posted by Angela - Bookaunt at Tuesday, February 17, 2015