Books That Caught My Eye - May 20th 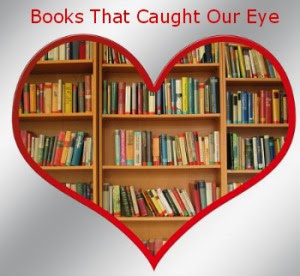 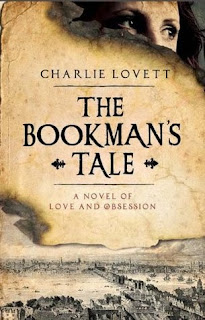 The Bookman's Tale by Charlie Lovett

Synopsis:
A mysterious portrait ignites an antiquarian bookseller’s search through time and the works of Shakespeare for his lost loveGuaranteed to capture the hearts of everyone who truly loves books, The Bookman’s Tale is a former bookseller’s sparkling novel and a delightful exploration of one of literature’s most tantalizing mysteries with echoes of Shadow of the Wind and A.S. Byatt's Possession.Nine months after the death of his beloved wife Amanda left him shattered, Peter Byerly, a young antiquarian bookseller, relocates from North Carolina to the English countryside, hoping to outrun his grief and rediscover the joy he once took in collecting and restoring rare books. But upon opening an eighteenth-century study of Shakespeare forgeries, he discovers a Victorian watercolor of a woman who bears an uncanny resemblance to Amanda. Peter becomes obsessed with learning the picture’s origins and braves a host of dangers to follow a trail of clues back across the centuries—all the way to Shakespeare’s time and a priceless literary artifact that could prove, once and for all, the truth about the Bard’s real identity. 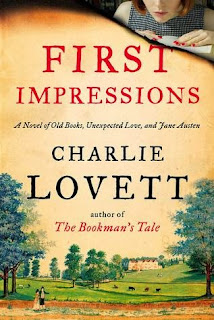 Synopsis:
A thrilling literary mystery costarring Jane Austen from the New York Times bestselling author of The Bookman’s TaleCharlie Lovett first delighted readers with his New York Times bestselling debut, The Bookman’s Tale. Now, Lovett weaves another brilliantly imagined mystery, this time featuring one of English literature’s most popular and beloved authors: Jane Austen.Book lover and Austen enthusiast Sophie Collingwood has recently taken a job at an antiquarian bookshop in London when two different customers request a copy of the same obscure book: the second edition of Little Book of Allegories by Richard Mansfield. Their queries draw Sophie into a mystery that will cast doubt on the true authorship of Pride and Prejudice—and ultimately threaten Sophie’s life.In a dual narrative that alternates between Sophie’s quest to uncover the truth—while choosing between two suitors—and a young Jane Austen’s touching friendship with the aging cleric Richard Mansfield, Lovett weaves a romantic, suspenseful, and utterly compelling novel about love in all its forms and the joys of a life lived in books. 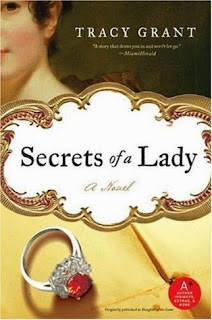 Secrets of a Lady by Tracy Grant

Synopsis:
In the glittering world of Regency London, where gossip is exchanged—and reputations ruined—with the tilt of a fan, Mélanie Fraser is the perfect wife. Devoted to her husband, Charles, the grandson of a duke, she is acknowledged as society's most charming hostess. But just as the elegant façade of Regency London hides a dark side, Mélanie is not what she seems. She has a secret: one that could destroy her perfect jewel-box life forever . . . and the cost to keep it is an exquisite heirloom ring surrounded by legend and power. The search for it will pull Mélanie and Charles into a gritty underworld of gin-soaked brothels, elegant gaming hells, and debtors' prisons. In this maze of intrigue, deception is second nature and betrayal can come far too easily . . . 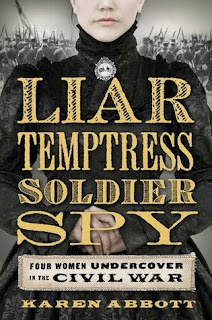 Synopsis:
Karen Abbott, the New York Times bestselling author of Sin in the Second City and “pioneer of sizzle history” (USA Today), tells the spellbinding true story of four women who risked everything to become spies during the Civil War.
Karen Abbott illuminates one of the most fascinating yet little known aspects of the Civil War: the stories of four courageous women—a socialite, a farmgirl, an abolitionist, and a widow—who were spies.
After shooting a Union soldier in her front hall with a pocket pistol, Belle Boyd became a courier and spy for the Confederate army, using her charms to seduce men on both sides. Emma Edmonds cut off her hair and assumed the identity of a man to enlist as a Union private, witnessing the bloodiest battles of the Civil War. The beautiful widow, Rose O’Neale Greenhow, engaged in affairs with powerful Northern politicians to gather intelligence for the Confederacy, and used her young daughter to send information to Southern generals. Elizabeth Van Lew, a wealthy Richmond abolitionist, hid behind her proper Southern manners as she orchestrated a far-reaching espionage ring, right under the noses of suspicious rebel detectives.
Using a wealth of primary source material and interviews with the spies’ descendants, Abbott seamlessly weaves the adventures of these four heroines throughout the tumultuous years of the war. With a cast of real-life characters including Walt Whitman, Nathaniel Hawthorne, General Stonewall Jackson, detective Allan Pinkerton, Abraham and Mary Todd Lincoln, and Emperor Napoleon III, Liar, Temptress, Soldier, Spy draws you into the war as these daring women lived it.
Liar, Temptress, Soldier, Spy contains 39 black & photos and 3 maps. 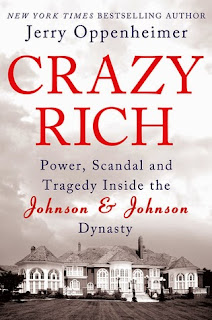 Synopsis:
From the founders of the international health-care behemoth Johnson & Johnson in the late 1800s to the contemporary Johnsons of today, such as billionaire New York Jets owner Robert Wood "Woody" Johnson IV, all is revealed in this scrupulously researched, unauthorized biography by New York Times bestselling author Jerry Oppenheimer. Often compared to the Kennedy clan because of the tragedies and scandals that had befallen both wealthy and powerful families, Crazy Rich, based on scores of exclusive, candid, on-the-record interviews, reveals how the  dynasty's vast fortune was both intoxicating and toxic through the generations of a family that gave the world Band-Aids and Baby Oil. At the same time, they've been termed perhaps the most dysfunctional family in the fortune 500. Oppenheimer is the author of biographies of the Kennedys, the Clintons, the Hiltons and Martha Stewart, among other American icons. 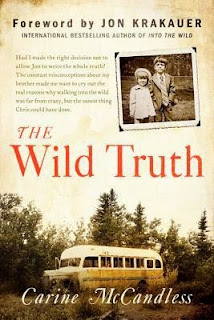 The Wild Truth by Carine McCandless

Synopsis:
"The Wild Truth is an important book on two fronts: It sets the record straight about a story that has touched thousands of readers, and it opens up a conversation about hideous domestic violence hidden behind a mask of prosperity and propriety."–NPR.org
The spellbinding story of Chris McCandless, who gave away his savings, hitchhiked to Alaska, walked into the wilderness alone, and starved to death in 1992, fascinated not just New York Times bestselling author Jon Krakauer, but also the rest of the nation. Krakauer's book,Into the Wild, became an international bestseller, translated into thirty-one languages, and Sean Penn's inspirational film by the same name further skyrocketed Chris McCandless to global fame. But the real story of Chris’s life and his journey has not yet been told - until now. The missing pieces are finally revealed in The Wild Truth, written by Carine McCandless, Chris's beloved and trusted sister.  Featured in both the book and film, Carine has wrestled for more than twenty years with the legacy of her brother's journey to self-discovery, and now tells her own story while filling in the blanks of his. Carine was Chris's best friend, the person with whom he had the closest bond, and who witnessed firsthand the dysfunctional and violent family dynamic that made Chris willing to embrace the harsh wilderness of Alaska. Growing up in the same troubled household, Carine speaks candidly about the deeper reality of life in the McCandless family. In the many years since the tragedy of Chris's death, Carine has searched for some kind of redemption. In this touching and deeply personal memoir, she reveals how she has learned that real redemption can only come from speaking the truth. 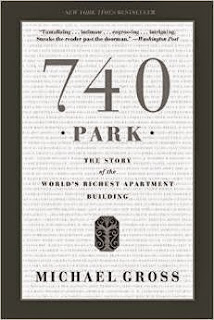 Synopsis:
For seventy-five years, it’s been Manhattan’s richest apartment building, and one of the most lusted-after addresses in the world. One apartment had 37 rooms, 14 bathrooms, 43 closets, 11 working fireplaces, a private elevator, and his-and-hers saunas; another at one time had a live-in service staff of 16. To this day, it is steeped in the purest luxury, the kind most of us could only imagine, until now. The last great building to go up along New York’s Gold Coast, construction on 740 Park finished in 1930. Since then, 740 has been home to an ever-evolving cadre of our wealthiest and most powerful families, some of America’s (and the world’s) oldest money—the kind attached to names like Vanderbilt, Rockefeller, Bouvier, Chrysler, Niarchos, Houghton, and Harkness—and some whose names evoke the excesses of today’s monied elite: Kravis, Koch, Bronfman, Perelman, Steinberg, and Schwarzman. All along, the building has housed titans of industry, political power brokers, international royalty, fabulous scam-artists, and even the lowest scoundrels.The book begins with the tumultuous story of the building’s construction. Conceived in the bubbling financial, artistic, and social cauldron of 1920’s Manhattan, 740 Park rose to its dizzying heights as the stock market plunged in 1929—the building was in dire financial straits before the first apartments were sold. The builders include the architectural genius Rosario Candela, the scheming businessman James T. Lee (Jacqueline Kennedy Onassis’s grandfather), and a raft of financiers, many of whom were little more than white-collar crooks and grand-scale hustlers. Once finished, 740 became a magnet for the richest, oldest families in the country: the Brewsters, descendents of the leader of the Plymouth Colony; the socially-registered Bordens, Hoppins, Scovilles, Thornes, and Schermerhorns; and top executives of the Chase Bank, American Express, and U.S. Rubber. Outside the walls of 740 Park, these were the people shaping America culturally and economically. Within those walls, they were indulging in all of the Seven Deadly Sins. As the social climate evolved throughout the last century, so did 740 Park: after World War II, the building’s rulers eased their more restrictive policies and began allowing Jews (though not to this day African Americans) to reside within their hallowed walls. Nowadays, it is full to bursting with new money, people whose fortunes, though freshly-made, are large enough to buy their way in. At its core this book is a social history of the American rich, and how the locus of power and influence has shifted haltingly from old bloodlines to new money. But it’s also much more than that: filled with meaty, startling, often tragic stories of the people who lived behind 740’s walls, the book gives us an unprecedented access to worlds of wealth, privilege, and extraordinary folly that are usually hidden behind a scrim of money and influence. This is, truly, how the other half—or at least the other one hundredth of one percent—lives.
Posted by Angela - Bookaunt at Wednesday, May 20, 2015