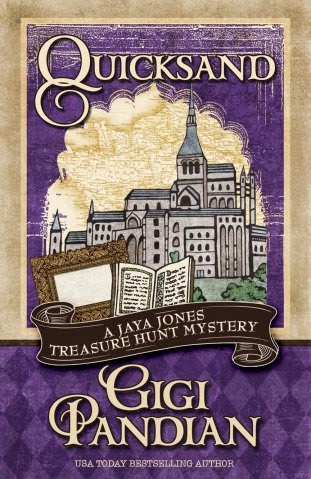 
SYNOPSIS
A thousand-year-old secret room. A sultan’s stolen treasure. A missing French priest. And an invitation to Paris to rekindle an old flame… Historian Jaya Jones finds herself on the wrong side of the law during an art heist at the Louvre. To redeem herself, she follows clues from an illuminated manuscript that lead from the cobblestone streets of Paris to the quicksand-surrounded fortress of Mont Saint-Michel. With the help of enigmatic Lane Peters and a 90-year-old stage magician, Jaya delves into France’s colonial past in India to clear her name and catch a killer.


REVIEW
This is the first book I have read by this author and now that I have read this one I want to go back and read the rest of the series.  You can read this book as a stand alone book even though it is part of a series. This book reads very quickly – in fact I read it in is just a couple of days. Even though it does read fast it is packed with plenty of adventure. I liked that there was not only mystery but some romance and history as well. You can tell the author did her research for the historical part of this book. Jaya is a great female lead character. I really liked her. Jaya and Lane have a good relationship and you will see that as the story goes along. If you are a fan of cozy mysteries you will enjoy this book. This book would be appropriate for teens to read as well.

ABOUT THE AUTHOR
USA Today bestselling author Gigi Pandian is the child of cultural anthropologists from New Mexico and the southern tip of India. After being dragged around the world during her childhood, she tried to escape her fate when she left a PhD program for art school. But adventurous academics wouldn’t stay out of her head. Thus was born the Jaya Jones Treasure Hunt Mystery Series (Artifact, Pirate Vishnu, and Quicksand). Gigi’s debut mystery novel was awarded a Malice Domestic Grant and named a “Best of 2012” Debut Novel by Suspense Magazine. Her short fiction has been short-listed for Agatha and Macavity awards, and she also writes the new Accidental Alchemist mystery series. She takes photos of gargoyles wherever she goes, and posts them on her Gargoyle Girl blog. Visit her website. Follow her on Facebook, Twitter, GoodreadsSubscribe to her newsletter Visit her Gargoyle photography blog: http://www.gargoylegirl.com Buy the book: Amazon | Barnes & Noble | Kobo | Itunes | Google Play

Visit each blogger on the tour: tweeting about the giveaway everyday of the Tour will give you 5 extra entries each time! [just follow the directions on the entry-form] Global giveaway open internationally: 1 winner will receive a print copy of the 3 books in the

CLICK ON THE BANNER TO READ OTHER REVIEWS, GUEST-POST, INTERVIEW