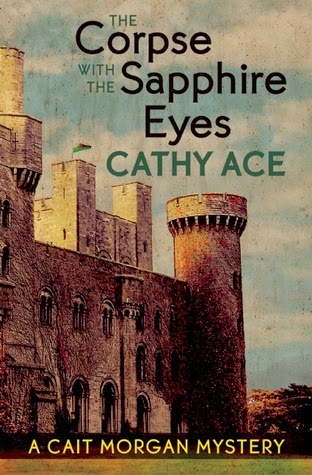 Synopsis:
It’s Cait and Bud’s wedding weekend and for the first time she feels like a bride—or at least, she’s supposed to. But then the rain won’t quit, the supposedly romantic Welsh castle feels creepy, and there’s a dead body on the stairs.
What first appears to have been the untimely, unfortunate, and accidental death of their wedding choirmaster quickly reveals itself to have been a murder. And when a series of mysterious events occur around the castle, Cait, Bud, and Cait’s sister Sian tackle the case of The Corpse with the Sapphire Eyes, attempting to solve the mystery before another sinister event can ruin their destination wedding.

About the Author
Originally from Wales, now-Canadian Cathy Ace writes the Cait Morgan Mysteries. In The Corpse with the Silver Tongue her foodie criminologist sleuthed in the south of France. The Corpse with the Golden Nose found Cait sniffing out a killer in BC’s vineyards. The Corpse with the Emerald Thumb met her when she was meddling in murders in Mexico. This time Cait is caught up in a true closed-room mystery in a classy casino restaurant in Las Vegas. When not helping Cait solve traditional, closed-circle mysteries, Cathy’s a keen gardener, ably assisted by her green-pawed chocolate Labradors.

Guest Post
I love the idea that your blog looks at life as something that can be always accompanied by books and enriched by them, because I have always been surrounded by them. I was a library rat, collected as many second-hand books as I could, and, when I had my own home in London, stuffed books into every room. As the years passed, and then I moved from the UK to Canada, I knew I had to part company with some of my “old friends”. But getting rid of books is a terrible wrench. However, practicality prevailed, and I arrived in Canada with only a dozen or so boxes of books. Now that I have a new home that’s much bigger than my old flat in London, I have, of course, been able to return to my old book-collecting ways!
I used to have piles and piles of books in my study/writing room, but I have to admit that I found they encroached upon the feeling of space I needed to be able to think freely. So, when I redecorated my study/writing room, I forced myself to move most of my books to other rooms, and I have now contained what’s left within two sets of shelves (well, more or less contained – they spill over now and again!)
This bookshelf is one of my favourites – the red-bound volumes are my collection of the complete works of Agatha Christie. I re-read them sometimes, I see them (and sometimes stroke them, searching for inspiration) on a daily basis, and they remind me that the best way to write is to sit at a desk and WRITE!
Books can take us anywhere in the world – as my Cait Morgan Mysteries prove – and can introduce us to people we fall in love with, want to spend more time with…and sometimes want to see having their come-uppance, or worse. In THE CORPSE WITH THE SAPPHIRE EYES Cait arrives at a Welsh cliff-top castle where she’s due to marry her fiancé, retired homicide cop Bud Anderson, in a couple of days’ time, but the corpse of the castle’s choirmaster is found at the bottom of a staircase, and the wedding weekend goes downhill from there!


I know that Cait would be someone who would prefer a printed paper book to an e-book, but she travels so much she might be advised to invest in some sort of e-reading device so she can read while she flies to different parts of the world…because once she reaches her destination my money’s on her tripping over a corpse with a precious body part before the third page of her adventure!

a Rafflecopter giveaway
Posted by Angela - Bookaunt at Friday, May 08, 2015