Blade of the Samurai by Susan Spann 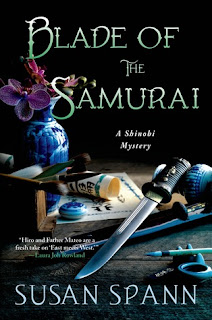 I received this book in exchange for a fair and honest review
Published: July 15, 2014
Number of Pages: 304
Genre: Mystery
Series: Shinobi Mystery #2

When the shogun summons Hiro and Father Mateo, the Portuguese Jesuit priest under Hiro's protection, to find the killer, Hiro finds himself forced to choose between friendship and personal honor.

The investigation reveals a plot to assassinate the shogun and overthrow the ruling Ashikaga clan. With Lord Oda's enemy forces approaching Kyoto, and the murderer poised to strike again, Hiro must use his assassin's skills to reveal the killer's identity and protect the shogun at any cost. Kazu, now trapped in the city, still refuses to explain his whereabouts at the time of the murder. But a suspicious shogunate maid, Saburo's wife, and the shogun's stable master also had reasons to want Saburo dead. With the shogun demanding the murderer's head before Lord Oda reaches the city, Hiro and Father Mateo must produce the killer in time . . . or die in his place.

Susan Spann's Blade of the Samurai is a complex mystery that will transport readers to a thrilling and unforgettable adventure in sixteenth-century Japan.

Review:
Just like the first book in this series this book is full of twists and turns that will have you guessing right up until the end of the book. I also like the historical aspect of this book and am learning a little more about Japan with each of this author's books that I am reading. This is the second book in this series and you will need to read them in order to keep up with the characters. The author does a good job with the vivid descriptions and characters that are very well developed. This is the type of book that will keep you turning the pages so you can see what is going to happen next. I am looking forward to the next book in this series.

About the author:
Susan Spann began reading precociously and voraciously from her preschool days in Santa Monica, California, and as a child read everything from National Geographic to Agatha Christie. In high school, she once turned a short-story assignment into a full-length fantasy novel (which, fortunately, will never see the light of day).

A yearning to experience different cultures sent Susan to Tufts University in Boston, where she immersed herself in the history and culture of China and Japan. After earning an undergraduate degree in Asian Studies, Susan diverted to law school. She returned to California to practice law, where her continuing love of books has led her to specialize in intellectual property, business and publishing contracts.

Susan's interest in Japanese history, martial arts, and mystery inspired her to write the Shinobi Mystery series featuring Hiro Hattori, a sixteenth-century ninja who brings murderers to justice with the help of Father Mateo, a Portuguese Jesuit priest. The first novel, Claws of the Cat, releases July 16, 2013.

She is President of the Northern California chapter of Mystery Writers of America, and a member of Sisters in Crime, the Historical Novel Society, and the Rocky Mountain Fiction Writers' Association. Susan is represented by Sandra Bond of Bond Literary Agency.

Shinobi Series
#1 Claws of the Cat
#2 Blade of the Samurai
#3 Flask of the Drunken Master
Posted by Angela - Bookaunt at Tuesday, July 21, 2015