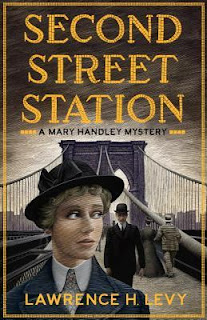 Synopsis:
A historical mystery featuring the witty and wily Mary Handley, the first woman detective in Brooklyn, as she tries to prove herself in a man's world while solving a high profile murder.

Mary Handley is a not your typical late-nineteenth century lady. She's fiery, clever, daring—and she’s not about to conform to the gender norms of the day. Not long after being fired from her job at the hat factory for insubordinate behavior, Mary finds herself at the murder scene of Charles Goodrich, the brother of a prominent alderman and former bookkeeper of Thomas Edison. When Mary proves her acumen as a sleuth, she is hired by the Brooklyn police department—as the city’s first female policewoman—to solve the crime. The top brass of the department expect her to fail, but Mary has other plans. As she delves into the mystery, she finds herself questioning the likes of J. P. Morgan, Thomas Edison, and Nikola Tesla. Mary soon discovers the key to solving the case goes well beyond finding a murderer and depends on her ability to unearth the machinations of the city’s most prominent and respected public figures, men who will go to great lengths to protect their secrets.

Much like Mr. Churchill’s Secretary and Maisie Dobbs, Second Street Station presents a portrait of a world plunging into modernity through the eyes of a clever female sleuth. Mary Handley is an unforgettable protagonist whose wit, humor, and charm will delight readers from the very first page.

What I thought of this story:
One of the first things that drove me to want to read this book was that is was a mystery book with a historical setting. These are two of my favorite things to read about. I liked getting to know Mary and can't wait to see that else she gets involved in as this series progresses. She was a fun person to follow along with as she finds herself hired by the police to help solve this crime. I also liked how the author used the historical figures as a part of the story and the way he did so just seemed to fit together. There were plenty of twists and turns throughout this book to keep you guessing until the end. Another thing I enjoyed was the author's writing style. For me it was an easy to read book. This book in my opinion has a lot going for it and I look forward to the next book.

What I thought of the cover:
I did like this cover. I liked how it showed us the main character as well as a glimpse of where the story was going to take place.

About the author:
LAWRENCE H. LEVY is a highly regarded film and TV writer who is a Writers Guild Award winner and two-time Emmy nominee. He has written for various hit TV shows such as Family Ties, Saved by the Bell, Roseanne, and Seinfeld. Second Street Station is his first novel.