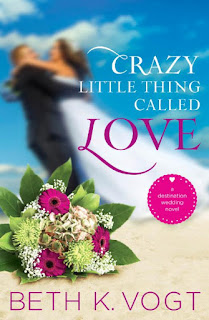 Synopsis:
Wedding bells and storm clouds collide in the first engaging novel in a brand-new series about destination weddings, the power of love, and the possible mishaps and missteps that happen on a couple’s journey down the aisle to “I do.”

Paramedic Vanessa Hollister has put her adolescence behind her, including the unwanted label of being the new kid in town over and over again, thanks to her father’s military career. She’s overcome what her mother called “the biggest mistake of her life” and is planning an elegant destination wedding in Destin, Florida with her new fiancé. But will the reappearance of her first husband from her what-were-you-thinking teenage elopement disrupt her dream of an idyllic beach wedding?

As a professional storm chaser, Logan Hollister is used to taking risks. However, a reckless decision during the last tornado season has him questioning the future of his team, the Stormmeisters. Coming face to face with his ex-wife eight years after their divorce compels him to confront his greatest regret: losing Vanessa. Does their past give him the right to interfere with her future?

A fast-moving, powerful hurricane throws Vanessa and Logan together as they evacuate to a storm shelter along with other residents of the Florida Gulf Coast. Forced to spend time together, the pair battles unexpected renewed feelings for each other.

Vanessa and Logan are faced with a choice: Should they accept, once and for all, their teenage marital mistake? Or is God offering them a second chance at happily ever after?

Review:
This was a fun book to read. It is always fun to read about weddings and the happily ever after. I enjoy books that include wedding planning and this book takes place just down the road from where I live which makes it even more interesting to me. The characters could have been your next door neighbor so it made it easy to connect with them. This was a fast paced book and a good one to take along to the beach. I felt for Vanessa trying to figure out what was going to happen with her life, stay with her fiance or re-connect with her ex-husband. Another thing that I liked was how the author included quotes at the beginning of each chapter. I am looking forward to the next book in this series.

About the author:
Beth K. Vogt believes God’s best often waits behind the doors marked “Never.” A 2015 RITA® Finalist and a 2014 Carol Award finalist, Beth is a contemporary romance novelist with Howard Books. Her 2014 novel, "Somebody Like You," was one of Publisher’s Weekly’s Best Books of 2014. In 2015 she introduced her destination wedding series with both an e-novella, "Can’t Buy Me Love," (May) and a novel, "Crazy Little Thing Called Love" (June)
Posted by Angela - Bookaunt at Thursday, July 23, 2015