To Capture Her Heart by Rebecca DeMarino - Review and Giveaway 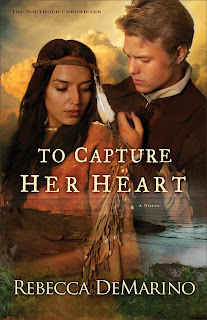 I received this book from the author in exchange for a fair and honest review.
Published: July 7, 2015
Number of pages: 352
Genre: Historical Fiction
Series: Southold Chronicles

Synopsis:
In an uncertain time, Heather Flower faces a choice that will change her life forever

It is 1653 and Heather Flower, a princess of the Montaukett tribe, is celebrating her wedding feast when a rival tribe attacks, killing the groom and kidnapping her. Though her ransom is paid by an Englishman, she is bound by her captors and left to die—until she finds herself rescued by handsome Dutch Lieutenant Dirk Van Buren.

Still tender from her loss, Heather Flower begins to heal in the home of the Hortons, English friends of her people. Torn between her affection for Dirk and her longtime friendship with Ben Horton, Heather Flower must make a difficult choice—stay true to her friend or follow her heart.

Review:
I have enjoyed reading this book just as much as I did the first one. Rebecca has a way of making you feel as if you are a part of this story. I would have loved to meet Mary and all the other ladies of Southold and to sit down with them at the Wednesday meetings. They are all so caring and loving. I felt bad for Heather Flower and all she had to go through and then to have to overcome her sadness to find love again. I was pulling for Heather to love Ben as I did not care for Dirk. There was just something about him that I just did not care for. I am not going to tell you who she picks you will have to read this book for yourself to find out. This is the second book in this series and I suggest reading them in order as you will more out of the story that way. I am looking forward to the third book in this series.

About the author:
Rebecca DeMarino writes love, legends and lore as a historical romance author and lives in the beautiful Pacific Northwest. She inherited her love of baking and gardening from her mother, a love of horses, reading and writing from her dad, and the wanderlust gene from both parents. Her travels have taken her from Alaska to Nebraska and Florida, from Long Island to England and Italy, and from Washington DC to Texas, California and Guam. But usually you can find her at home, enjoying her grandchildren and baking crisp little ginger cakes. From Publisher’s Weekly ~ DeMarino's … strong suit is recreating history and relating it to readers. You can also find her at www.RebeccaDeMarino.com, @RebeccaDeMarino, on Facebook and Pinterest.

Recipe from Rebecca:
My mom loved her apple trees and could bake a scrumptious apple pie! In my research for The Southold Chronicles, I enjoyed learning how the English were dismayed by the small, sour apples they found growing in the wilds of New England in the early 1600’s.

Based on stories she undoubtedly heard before making her voyage, Mary Horton most likely brought her own apple seeds. Mayhap her papa packaged one of his own little pippin saplings with love and sent it to her on a later voyage. Most assuredly he knew she would miss her English apples!

Cut lard into flour and salt until combined to the size of peas. Sprinkle in water, one tablespoon at a time, tossing with a fork until pastry leaves sides of bowl. Hint: use ice water. Gather into ball, divide in two and roll into two pastry rounds on floured board.

Mix together the dry ingredients in large bowl. Mince apples or slice thin. (Should equal 6 cups) Stir apples into flour mixture to coat. Hint: put apples and flour mixture into a large zip-lock bag and massage until coated. Line a 9” pie pan or plate (Hint: spray with canola oil) with pastry round. Pile apple mixture into pie plate, dot with chunks of butter. Cover with second pastry round, crimp edges to seal. Cut slits in top. Bake 40 – 50 minutes, until top is browned and juice bubbles from slits. Halfway through baking, brush cover (top crust) with rosewater and sprinkle with sugar. Hint: Cover edges with foil last 15 minutes of baking.

As a historical fiction author, I love when my research turns up a gold nugget of information like Heather Flower - was she legend, lore or did she literally exist? She may be all three. Without a doubt her existence is controversial.

I first discovered the story of Heather Flower while researching A Place in His Heart, my debut novel about my English ancestors, the Hortons. My first book covers a time period between 1630 - 1640, so when I read an account that Englishman Lion Gardiner paid a ransom for the daughter of Montauk's Grand Sachem Wyandanch I was intrigued, and looked at all different angles to include the story, but the time frame did not fit.

I did have my heroine, however, for book two of The Southold Chronicles! Further research revealed there are three or four theories regarding Heather Flower. I chose to blend those theories in my work of fiction.

Four theories that surround Heather Flower:
She was Quashawam, the daughter of Grand Sachem Wyandanch and Heather Flower was her nickname. Historically, records exist showing Quashawam became Grand Sachem of the Montauk when her parents and brother died.
She was Cantoneras, a Long Island native from Eaton's Neck who married the Dutchman Cornelius Van Texel or Tassle, whose granddaughter, Katrina, is of Washington Irving's Legend of Sleepy Hollow fame.
Wyandanch had two daughters, Quashawam and Heather Flower.
Heather Flower is a fabrication, as well as the story of the kidnapping of Wyandanch's daughter. Although Lion Gardiner's personal papers include an account of paying a ransom to the Narragansetts for the release of Wyandanch's daughter, the lack of a Montaukett written history clouds the matter. Some have alleged Gardiner may have written the story only to support the colonial's political motives.

As I read of the controversies and theories, I read too, about the beautiful and proud Montaukett people. Their legacy is one of loss and perseverance. Though many died from diseases not known to them before the white man came, there were others who survived, like my fictional character Abbey, and I believe live on through their descendants today.

To me, Heather Flower is truly a legend and a fascinating heroine! Leg·end: lejənd/ noun 1. a traditional story sometimes popularly regarded as historical but unauthenticated.

What do you think? Legend? Lore? Real?

Rebecca DeMarino writes love, legends and lore as a historical romance author and lives in the beautiful Pacific Northwest. From Publisher’s Weekly ~ DeMarino's … strong suit is recreating history and relating it to readers.

To Capture Her Heart Book Launch
Posted by Angela - Bookaunt at Wednesday, July 22, 2015