Coming Back Stronger by Drew Brees 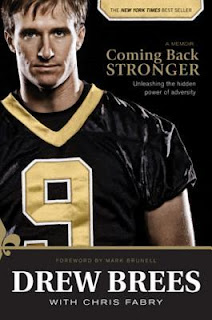 Synopsis:
When a potentially career-ending shoulder injury left quarterback Drew Brees without a team--and facing the daunting task of having to learn to throw a football all over again--coaches around the NFL wondered, "Will he ever come back?" After Hurricane Katrina devastated New Orleans, leaving more than 80 percent of the city underwater, many wondered, "Will the city ever come back?" And with their stadium transformed into a makeshift refugee camp, forcing the Saints to play their entire 2005 season on the road, people questioned, "Will the Saints ever come back?" It takes a special person to turn adversity into success and despair into hope--yet that is exactly what Super Bowl MVP Drew Brees has done--and with the weight of an entire city on his shoulders. "Coming Back Stronger" is the ultimate comeback story, not only of one of the NFL's top quarterbacks, but also of a city and a team that many had all but given up on. Brees's inspiring message of hope and encouragement proves that with enough faith, determination, and heart, you can overcome any obstacle life throws your way and not only come back, but come back stronger.

What did I think of this book:
This will be the first time that I am writing a review for an audio book. I have listened to quite a few of them but do not usually do reviews so now I am going to start. Although I am a Green Bay Packers fan I still enjoy reading/listening to books by other teams' players and coaches if the book sounds good to me. I have seen Drew Brees on a number of interviews and such while watching football games and always thought he seemed like a good guy and I do not hate the Saints so I thought why not give the book a chance. Let me tell you that I am glad I did. This was a very enjoyable book to listen to. He is a very inspiring person. He talks a little about his childhood but talks a lot about he had a potentially career ending injury and how he came back from that to become a better person and player. I found myself laughing at parts of this book especially when he talks about he met his wife and tried to get her to talk to him. This couple are so good together and have so many good things not only for the people of New Orleans but others as well. It was also nice to hear how he talked about the city of New Orleans and how they also came back stronger after the hurricane and how they stand behind their team. This man is someone that all kids watching the NFL games can truly look up to and aspire to be like. I think we can all take something from this book to use in our life. A very good book.

About the author:
Drew Brees is the 2009 Super Bowl MVP winning quarterback for the New Orleans Saints. A 2001 graduate of Purdue University, Drew was a two time Heisman finalist and led the Boilermakers to a Big Ten championship and a Rose Bowl appearance during the 2000 season.

On February 7, 2010, he led the Saints to their first World Championship against the Indianapolis Colts in Super Bowl XLIV, completing a record thirty two passes on his way to being named Super Bowl MVP.

As much pride as Drew takes in his on-field performance, he takes even more pride in his community service endeavors. Drew and his wife, Brittany, established the Brees Dream Foundation in 2003 and since then have raised and/or committed more than $5 million to help advance cancer research; improve care for cancer patients; and help rebuild schools, parks, playgrounds, and athletic fields in New Orleans, San Diego, and the Purdue community.

A native of Austin, Texas, Drew currently lives with his wife, Brittany, and son, Baylen, in New Orleans.
Posted by Angela - Bookaunt at Thursday, November 05, 2015

Email ThisBlogThis!Share to TwitterShare to FacebookShare to Pinterest
Labels: Biographies