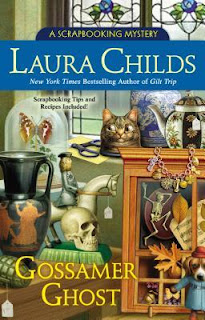 Synopsis:
Carmela Bertrand knows that Halloween in New Orleans means a week of rabble-rousing, costumed craziness—and she can’t wait to get the party started. But when a local antiques dealer turns up dead, Carmela suddenly finds herself in a real-life danse macabre…

An evening’s work deciding on the class schedule for her scrapbooking shop has put Carmela in the mood to kick up her heels. But after some strange noises draw her into Oddities, the neighboring antiques shop, Carmela’s night is abruptly put on hold when a bloody body falls out of a curio cabinet—and into her arms.

While shop owner Marcus Joubert was known for being an eccentric with a penchant for eclectic merchandise, Carmela never thought he was the kind of man who could inspire the passion required to kill. But when Marcus’s assistant—and fiancée—Mavis reveals that a priceless death mask was also stolen, it becomes clear that murder wasn’t the culprit’s sole intention.

Carmela can’t resist the urge to investigate the growing mystery, but as the list of suspects increases, she realizes it’ll take every trick in the book to unmask the killer thief before there’s another night of murderous mischief…

What did I think of this book:
This is the twelth book that I have read in this series and I like each one as much as I did the first one I ever read by this author. She is who got me hooked on reading cozy mysteries. Carmella and her best friend Ava seem to always get themselves involved in some sort of trouble while trying to solve the newest murder. This time it is Carmella's next door neightbor that is killed. It was neat to see all the things that New Orleans does at Halloween. Some of the activities sound like they would be a hoot. I also like hearing about all the crafts that the ladies are creating. I am looking forward to the next one in the series.

About the author:
Laura Childs is the New York Times bestselling author of the Tea Shop Mysteries, Scrapbook Mysteries, and Cackleberry Club Mysteries, and a recent recipient of the Romantic Times Book Review’s Award for Best Amateur Sleuth. In her previous life, she was CEO/Creative Director of her own marketing firm and authored several screenplays. She is married to a professor of Chinese art history, loves to travel, and has two Chinese Shar-Pei dogs.
Posted by Angela - Bookaunt at Sunday, November 22, 2015