The Thread That Binds by Alice Hayes - Review, Guest Post and Giveaway 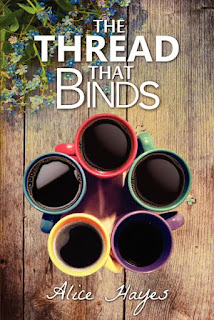 Synopsis:
Sherice is a new mother, a sonographer, quilter, and wife; an overworked young woman whose elderly mother is slipping away from her.

Sylvie is a newlywed and recent immigrant, unemployed and virtually penniless. Her husband’s paycheck can’t even cover prenatal care, let alone a baby, and her due date is only drawing nearer…

Joanne’s unconventional pregnancy turns her world upside down, redefining her career and relationships, and even bringing to the surface long-buried demons from her past.

Payton is seventeen, pregnant, and on the run. She flees to her uncle in Georgia with the hope of making a fresh start, but discovers making it on her own is harder than she could ever have imagined.

Gloria is trapped in an unhappy marriage; in love with someone else. Her life is falling apart. With a baby on the way, would it be selfish to flee?

Five women, once strangers, form bonds. Set in modern day Georgia, this is the story of friendship that blossoms in the land of country music, sweet tea, and secrets kept locked tight behind closed doors. Moving, funny, and at times heartbreaking, The Thread That Binds is a lesson in empathy, strength, and the beauty of love.

What did I think about this book:

This is the first book I have read by this author and I thought it was a good book. I enjoyed getting to know each of these women in this book and how they ended up forming a friendship that brought them close together. For me this is a book that grabbed me from the first page and did not let go until the very end. The author's writing style made the book read quickly. The author did a good job with the characters each of them could have been anyone you know. I think that is what I liked about this book is that I felt as if I was friends with these ladies as well. I recommend this book to anyone looking for a story of friendship, strong bonds and love.

About the author:
Originally from Winchester, England, Alice’s plans to read law at a British university were disrupted when she fell deeply in love with Georgia, USA, while studying abroad. After moving all over Georgia, Alice has finally settled in Athens and has no plans to go anywhere else.

She is a single mother to a three-year-old girl and a 65 lb hound dog. She likes coffee, wine, and anything edible with the words ‘salted caramel’ in its description.

At the time of publication, Alice is a 24-year-old history student working full time in a law office, and writing fiction at every stolen moment. She hasn’t slept in approximately two years. Her first published novel, The Thread That Binds won third place in World's Best Story contest.

Guest Post:
I looked again at the customer email I had received. “I had the baby”, it said, with no pomp or revelry. Not so much as a “healthy baby girl” or “little baby boy”. For a moment, I wondered if hidden behind a lack of words was something worrisome.

When I was pregnant with my daughter, I was a new immigrant to the United States. I had not yet received work authorization, and sitting on my heavily pregnant laurels did not bode well for me. So I reached out in an online community of pregnant mothers with an interesting proposal: if anyone wanted a patchwork quilt made, I would do it, for free; to gain experience and skill so that once my holy Green Card arrived could make quilting my full-time job. A few women reached out and I made them quilts, for free, from materials they provided me. Now, I had received this cryptic email from one of these ‘customers’ I had befriended, and I wasn’t sure how to react.

The truth is, I suffered from horrific prenatal depression. I was also bullied online after I admitted that we were too poor to afford health insurance or prenatal care (these were in the days pre-ACA; and I was denied Medicaid), and I learned something during the whole experience: you never know what strangers are going through. The women online who openly wished ill harm on me and my baby did not know that I was suffering day and night. So receiving an email like that – “I had the baby” – my first thought was “she doesn’t sound excited… Is she suffering, too?”

Eventually, my circumstances changed and I was able to get health insurance. My first prenatal visit was in my third trimester. My baby was born in July 2012: a big, healthy girl. Yet still, I thought about the attacks I had received online. Still, I thought about that email from my customer-friend, and although I would very soon learn first-hand that her brevity came from nothing more than exhaustion, it got me thinking: what if there was someone who made quilts, like me, but also reached out to the women who would receive them? And just like that, the character of Sherice came to life.

Sherice is named for one internet stranger who didn’t crucify me, but instead reached out to help. She contacted me to say that she’d received a lot of gift cards at her baby shower – more than she could ever use – and was there anything I needed for my baby? I was touched by her kindness, and I decided that I was going to write a novel about a quilter who believes in helping and uplifting strangers.

She meets Sylvie, a new immigrant who cannot work and cannot afford healthcare (that might sound familiar). She cannot walk away leaving her helpless. She later meets Joanne, Payton, and Gloria: all pregnant; all struggling; all in need of friendship.

The Thread That Binds is fiction, but its message is not. Extending kindness to strangers usually costs us nothing, and you never know just how badly they might need it.

Giveaway:
Prizes: ​
Win 1 of 5 copies of The Thread That Binds
(choice of print or ebook) (USA & Canada)
a Rafflecopter giveaway

Dec 7 - Worth Getting in Bed For - review / guest post