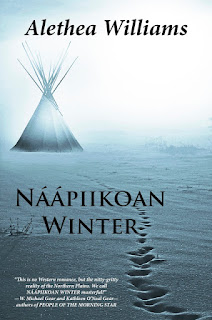 Synopsis;
At the turn of a new century, changes unimagined are about to unfold. THE WOMAN: Kidnapped by the Apaches, a Mexican woman learns the healing arts. Stolen by the Utes, she is sold and traded until she ends up with the Piikáni. All she has left are her skills—and her honor. What price will she pay to ensure a lasting place among the People? THE MAN: Raised in a London charitable school, a young man at the end of the third of a seven year term of indenture to the Hudson’s Bay Company is sent to the Rocky Mountains to live among the Piikáni for the winter to learn their language and to foster trade. He dreams of his advancement in the company, but he doesn’t reckon the price for becoming entangled in the passions of the Piikáni. THE LAND: After centuries of conflict, Náápiikoan traders approach the Piikáni, powerful members of the Blackfoot Confederation. The Piikáni already have horses and weapons, but they are promised they will become rich if they agree to trap beaver for Náápiikoan. Will the People trade their beliefs for the White Man’s bargains? Partially based on the works of Canadian trader, explorer, and mapmaker David Thompson, Náápiikoan Winter spans a continent, examining the cultures in flux at the passing of an era and the painful birth of another.

Praise for the book:
"When we read NAAPIIKOAN WINTER our hearts were swept back in time. Alethea Williams writes with the same authority and beauty that A. B Guthrie, Bernard de Voto, Wallace Stegner, and Conrad Richter imparted to the page. We marveled at the quality of her research, and the precision with which Williams recreated the world of the Blackfeet at the time of white contact. Find the first page, dear reader, and you'll fall effortlessly into a long-gone world filled with both the noblest of humans, and the dross that always follows. This is no Western romance, but the nitty-gritty reality of the Northern Plains. We call NAAPIIKOAN WINTER masterful!" -W. Michael Gear and Kathleen O'Neal Gear, authors of PEOPLE OF THE MORNING STAR

About the Author
Alethea Williams grew up in southwest Wyoming. Willow Vale is her first novel of the immigrant experience, dealing with the Tyroleans after WWI. Willow Vale won a 2012 Wyoming State Historical Society Publications Award. Her second novel details the Irish immigrant experience and the Orphan Train movement in Walls for the Wind. Walls for the Wind is a WILLA Literary Award finalist, a gold Will Rogers Medallion winner, and placed first at the Laramie Awards in the Prairie Fiction category. Her third book, a Western American pre-history spanning the North American continent, entitled Náápiikoan Winter is now available. She also has a collection of newspaper columns in print:Boomer Blues Book: Staying Alive and Sane in the Modern American West. Twice president of Wyoming Writers, Inc. she lives in her native state with long-time friend, Amazon parrot Bob. For more information please visit Alethea Williams' blog. You can also find her on Facebook, Twitter, and Goodreads.

Giveaway
To win a copy of Náápiikoan Winter please enter using the GLEAM form below. Five copies are up for grabs! Rules – Giveaway ends at 11:59pm EST on July 1st. You must be 18 or older to enter. – Giveaway is open to US and Canada residents only. – Only one entry per household. – All giveaway entrants agree to be honest and not cheat the systems; any suspect of fraud is decided upon by blog/site owner and the sponsor, and entrants may be disqualified at our discretion – Winner has 48 hours to claim prize or new winner is chosen. Naapiikoan Winter Blast
Posted by Angela - Bookaunt at Tuesday, June 28, 2016