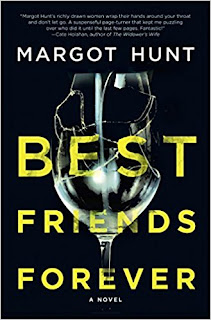 Book description
Kat Grant and Alice Campbell have a friendship forged in shared confidences and long lunches lubricated by expensive wine. Though they’re very different women—the artsy socialite and the struggling suburbanite—they’re each other’s rocks. But even rocks crumble under pressure. Like when Kat’s financier husband, Howard, plunges to his death from the second-floor balcony of their South Florida mansion.

Howard was a jerk, a drunk, a bully and, police say, a murder victim. The questions begin piling up. Like why Kat has suddenly gone dark: no calls, no texts and no chance her wealthy family will let Alice see her. Why investigators are looking so hard in Alice’s direction. Who stands to get hurt next. And who is the cool liar—the masterful manipulator behind it all.

Meet the author - Margot Hunt
Margot Hunt is the pseudonym of a bestselling writer of twelve previous novels. Her work has been praised by Publisher’s Weekly, Booklist and Kirkus Reviews. BEST FRIENDS FOREVER is her first psychological thriller.

“What are you taking time off from?” Kat asked, looking at me intently over the rim of her martini glass.

“I was an associate professor at the University of Miami,” I said. “I taught in the math department there.”

“Wow,” Kat said, looking impressed. I could feel my cheeks growing hot. “What did you teach?”

I smiled. “Not exactly, although he always was my favor- ite Star Trek character. I taught systemic reasoning.” Kat’s eyebrows knit together, and I knew she wanted an example. “Problems like…all humans are mortal. Kat is a human.” I gestured toward her with a wave of the hand. “Therefore Kat is mortal.”

Kat wrinkled her nose. “I don’t think I like that problem.” “Sorry,” I said.

I laughed. “Pretty much. That’s what being a stay-at-home mother feels like a lot of the time. But, no, actually I’m writ- ing a book of logic puzzles for kids.” I surprised myself by telling her this. Hardly anyone knew about my little project, as I thought of it. I looked at it much like not telling anyone you’re pregnant until you get past the risky first trimester. I didn’t want everyone asking me about it if I failed to finish or publish the book. So why had I told Kat? Was I trying to show off?

Kat looked impressed. “Good for you.”

“What do you do?” I asked. I had already clocked her Louis Vuitton carry-on, her navy cashmere sweater, the diamond studs sparkling in her ears that I suspected were not cubic zir- conia, like the pair I was wearing. If she was a stay-at-home mom, it was on a different level than the one I lived on. “You said you have kids?”

“Kid. One daughter, but she’s all grown up now. She’s pre- med at Vanderbilt. She obviously didn’t take after me, since I faint at the sight of blood.” Kat smiled. “I have an art gal- lery, which is probably about as far away from medicine as you can get.”

“Wow,” I said, intrigued. “What kind of art do you sell?” “Mostly modern and contemporary, although my real pas- sion is sculpture,” Kat said. “That’s why I came up to New York after Christmas. To tour some galleries, follow a few leads. Nothing panned out, but what are you going to do?

How about you? Were you staying in the city?” “No, we were in Syracuse, visiting family,” I said.

“You’re smarter than me. I don’t know what I was think- ing going to Manhattan on New Year’s.” Kat rolled her eyes. “The crowds were insane. I finally gave up and spent the last two days holed up in my hotel room, eating room service and watching reality TV, which I really don’t get at all. Why does anyone find watching grown women wearing far too much makeup, going to awkward social events and throwing temper tantrums entertaining? It’s so bizarre. And why would anyone want to have someone following her around, filming her? That would be my worst nightmare.”

Her trip sounded incredibly glamorous to me. The idea of having two days to myself to luxuriate in a posh hotel, or- dering room service and watching mindless television shows sounded like sheer decadence. I couldn’t remember the last time I had traveled without my husband or children.