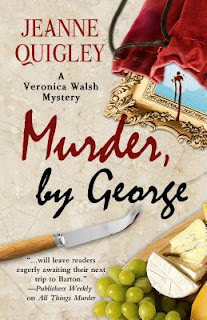 Book description
Retired soap opera actress Veronica Walsh leads a fulfilling second act in her Adirondack hometown of Barton. Her boutique, All Things, is thriving and she enjoys a romance with Professor Mark Burke. She has neither the time nor the desire to be an amateur sleuth.

Trouble finds her when architect Scott Culverson buys a vintage box at the village's annual flea market and discovers a valuable painting and love letter inside a locked drawer. The awe over the masterpiece, a 1920's portrait of Barton's main street, turns to rage when a fierce argument ensues. The box's seller insists the painting was not included in the sale, while Ella and Madeline Griffin, whose mother received the painting as a wedding present, demand that Scott return the painting to their family. The artist's daughter, the formidable Leona Bradshaw Kendall, later joins the battle over Orchard Street.

When Scott is stabbed to death and the painting and letter stolen, the Griffin sisters ask Veronica to help clear suspicion from their hot-tempered great-niece, Regina. Despite a vow to stay out of the investigation, Veronica's loyalty to her friends draws her into the case.

Veronica crosses paths with a shady contractor, brassy hairdresser, overwrought lawyer, and adoring Czech housekeeper as she searches for both killer and work of art. Whom can Veronica trust, and who will lead her to the brink of death?

Meet the author - Jeanne Quigley
Jeanne Quigley grew up reading mysteries, watching soap operas, and vacationing in the Adirondacks, never imagining these pleasures would be the foundation of her debut novel. Her love of characters-real and fictional-led her to study Sociology and English at the University of Notre Dame. Jeanne has never been a soap star, but she has worked in the music industry and for an education publisher. She lives in Rockland County, New York.

My thoughts
I was excited to continue with Veronica on her adventures in her quaint little town. This installment was set around an antique box and the treasure found inside of it. There was more than one person who was upset about the painting in the box which made for a good mystery as you were not sure who was the murderer. I liked how the romance from the first book continued on with this story. I thought the the author did a good job with keeping you interested when continuing with the series. The characters are developing more and the story lines remain interesting. A good second book.
Posted by Angela - Bookaunt at Saturday, January 13, 2018