A Shot in the Dark by Cleo Coyle - Review and Giveaway 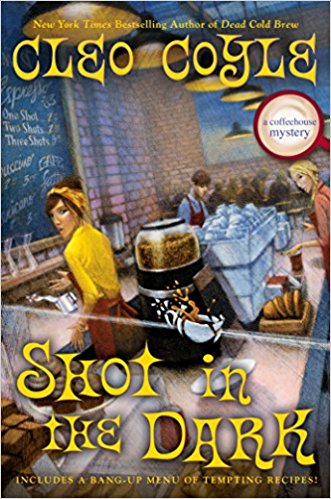 Book details
Shot in the Dark (A Coffeehouse Mystery)

Book description
A new smartphone dating game turns the Village Blend into a hookup hot spot, until one dark night, when a gunshot leaves a dead body behind and the landmark coffeehouse becomes the center of a whole new scene--a crime scene.

As Village Blend manager Clare Cosi attempts to finalize a date for her wedding, her ex-husband becomes addicted to making dates through smartphone swipes. Clare has mixed feelings about these quickie matchups happening in her coffeehouse. Even her octogenarian employer is selecting suitors by screenshot! But business is booming, and Clare works hard to keep the espresso shots flowing. Then one dark night, another kind of shot leaves a dead body for her to find.

The corpse is a successful entrepreneur who became notorious for his "hit it and quit it" behavior: prowling for women on dating apps, then devastating his conquests with morning-after insults. Though the NYPD quickly arrests one of his recent victims, Clare finds reason to believe she's been framed.

Now, with the help of her ex and crew of quirky baristas, Clare starts "swiping" through suspects in her own shop, determined to find the real killer before another shot rings out.

Meet the author - Cleo Coyle
CLEO COYLE is the pseudonym for Alice Alfonsi, writing in collaboration with her husband, Marc Cerasini. CLEO COYLE grew up in a small town near Pittsburgh, Pennsylvania. After earning scholarships to study writing at Carnegie Mellon and American Universities, she began her career as a cub reporter for The New York Times. Now an author of popular fiction and New York Times bestselling media tie-in writer, Cleo lives and works in New York City, where she collaborates with her husband (also a bestselling author) to pen the Coffeehouse Mysteries for Penguin. Together Cleo and her husband also write the Haunted Bookshop Mysteries under the name Alice Kimberly. When not haunting coffeehouses, hunting ghosts, or rescuing stray cats, Cleo and Marc are bestselling media tie-in writers who have penned properties for NBC, Lucasfilm, Disney, Fox, Imagine, and MGM. In their spare time, they cook like crazy and drink a lot of java. You can learn more about Cleo, her husband, and the books they write by visiting www.CoffeehouseMystery.com.

My thoughts
I though this was another hit by the team of Cleo Coyle. Each time I open a book by them it is like catching up with old friends. The characters always reach out to me. Although I was not so sure about some of the news ones added and with good reason since one of them ended up being not so nice. I agreed with Clare I do not like the swipe of an app to find a date. That just seem like trouble waiting to happen and of course it did. The author does a good job of keeping you guessing in this book. I would pick someone I thought committed the crime the oops not it. It took me several guesses and the author revealing the killer before I realized who it was. I also liked that there was not only mystery but a bit of romance and a little humor in this story. Great job Cleo - I look forward to the next one.