17 Cents and a Dream by Daniel Milstein - Review 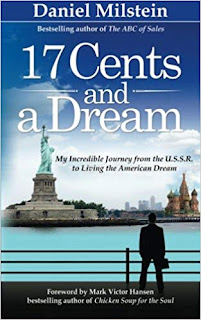 Book description
Through pure determination, fortitude and attitude, Daniel pulled out of impossibly difficult situations. His story is true, his story is a personal inspiration to me and I hope it will inspire you too to maximize your potential and go for the greatest of dreams.” - Mark Victor Hansen, Bestselling Author, Chicken Soup for the Soul.

On a cold December night in 1991, a young boy with seventeen cents in his pocket first set foot in the United States. Twenty years later that young man found himself the founder and CEO of a Multi-Million dollar corporation. Daniel Milstein’s harrowing story about how his mother, father and brother escaped the oppressive government of the U.S.S.R and immigrated to the United States and carved out a life for themselves has been described as the quintessential immigrant story of the era

Meet the author - Daniel Milstein
DANIEL MILSTEIN is founder, president and CEO of Gold Star Mortgage Financial Group. He has been recognized as the #1 loan officer in the United States; has achieved more than $3 billion in personal mortgage originations; and is one of the top 40 finance professionals in the nation, ranked by National Mortgage Professional Magazine. Milstein led the company to the Inc 500 list and one of the fastest growing companies in the United States. Gold Star has over 500 employees in 43 offices across the U.S. and has been named a Top Workplace in Michigan for three years by the Detroit Free Press. Milstein holds an honorary doctorate and BBA in business management from Cleary University, Ann Arbor, from which he graduated with honors. He is the author of The ABC of Sales: Lessons from a Superstar, which in March 2012 sold 10,000 copies and became the #1 sales book on Amazon.com and the thirty-first top seller of all ebook sales. --This text refers to the Hardcover edition.

My thoughts
I thought this was a very good an interesting book. I really have a hard time describing how I feel about it but in a good way. When you are growing up and you hear about a disaster in another country you don't really know how it affects people. After reading Daniel's story of going through Chernobyl - I just can't imagine. Then after reading what his life was like and the things he had endured really makes you thankful for what you do have and have had in your life. We take a lot for granted in our country. Reading this book also proves that if you really want something and you work hard enough you can achieve it.
Posted by Angela - Bookaunt at Tuesday, July 17, 2018