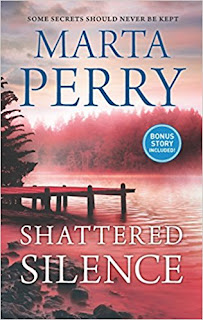 One moment Rachel Hartline is secure in her career and community. The next, she’s in the wrong place at the wrong time—watching her ex-husband commit a crime that puts her in unfathomable danger. Fear and hurt send her home to an Amish farm and the family she’s always trusted. But a private investigator is close behind—and he may be a threat to her in more ways than one…

Cold, calculating Clint Mordan isn’t convinced Rachel is as innocent in her ex-husband’s schemes as she claims, but when her ex’s enemies target Rachel, Clint is driven to keep her safe. Maybe the terror in her beautiful eyes and the target on her back aren’t an act. But as his feelings toward her deepen, Clint realizes he’s the only one who can keep Rachel alive in a game where only the killer knows the stakes.

Meet the author - Marta Perry
Marta Perry realized she wanted to be a writer at age eight, when she read her first Nancy Drew novel. A lifetime spent in rural Pennsylvania and her own Pennsylvania Dutch roots led Marta to the books she writes now about the Amish. When she’s not writing, Marta is active in the life of her church and enjoys traveling and spending time with her three children and six beautiful grandchildren.

Excerpt
CLINT EYED THE woman in the car ahead of him. He’d seen the movement of her head when she spotted him in her rearview mirror. Was she going to confront him here and now?

No, apparently not. Rachel Hartline pulled out, signaling as if he were any other driver close behind her. If she was shaken that he was on her tail so quickly, she didn’t show it. She might still try to lose him, but he was ready for that…even grimly amused at the thought.

But Rachel made no move to do any such thing, and after a couple of turns, it was clear she was headed home. Good. There were a few things they had to talk about.

He’d checked in with Logan to learn that according to the watchman, Rachel had visited the offices last night. The security camera had caught her arrival and departure. It hadn’t shown anything of Paul Hartline, after he'd supposedly left for the day. If he’d been there, he must have left by an unmonitored hallway. And if Attwood had taken their advice, that wouldn’t have happened.

When he’d heard about Rachel’s visit, the flicker of sympathy Clint had felt earlier was extinguished. Obviously she knew something, even if she hadn’t been involved. And he intended to know what that was.

Clint frowned. Logan had questioned the night watchman, who’d insisted she’d been in the offices alone only for a few minutes. He could have been covering up for his own laxity in letting her in, but the film bore out what he said. Even so, if she knew how to get into the files, it would take only that long to make a copy.

As for his insistence that she hadn’t been carrying anything but her handbag when she left…a flash drive wouldn’t take up much space at all. His jaw hardened. Yes, Rachel had a lot of explaining to do.