Me Before You by JoJo Moyes - Review 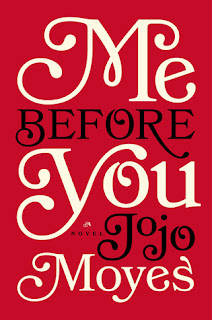 Synopsis:
Lou Clark knows lots of things. She knows how many footsteps there are between the bus stop and home. She knows she likes working in The Buttered Bun tea shop and she knows she might not love her boyfriend Patrick.

What Lou doesn't know is she's about to lose her job or that knowing what's coming is what keeps her sane.

Will Traynor knows his motorcycle accident took away his desire to live. He knows everything feels very small and rather joyless now and he knows exactly how he's going to put a stop to that.

What Will doesn't know is that Lou is about to burst into his world in a riot of colour. And neither of them knows they're going to change the other for all time.

What did I think of this book:
Wow! I have to say that I orginially picked this book up because I saw this author mentioned many places and it came recommended to me from a friend, so I thought ok I will give it a chance. This book is definately going to be on my list of books that are my all time favorite books ever. It was a book that I did not want to put down but at the same time did not want to rush through it because I did not want it to end. When I first met Will I thought I am not going to like him, but I ended up really liking him not that far into the book. Then we have Lou she could make me smile and shake my head all at the say time. She was a little bit of a goof but that is what I liked about her. I could not imagine being in Will's position and all of the hate going through his head. The way the author wrote the story she would give you a view from other major characters in this story. By doing this I think it added to the story line perfectly. My only complaint is that I wish I had the second book: After You so I could start it tonight as I want to know what happens next for Lou and the Traynors. This is a book I will recommend to everyone I talk to and I think it is fitting for young adults to read as well. I will be checking out other books written by this author as well.

About the author:
Jojo Moyes is a British novelist.