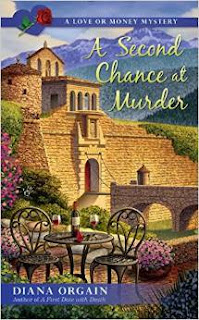 Synopsis:
In the second Love or Money Mystery from the author of A First Date with Death, reality TV gets all too real with murder...

After Love or Money made them reality TV stars, former cop Georgia Thornton and her new boyfriend Scott were supposed to live happily ever after. Unfortunately as their fifteen minutes of fame came to an end, actual reality kicked in and their prize money quickly evaporated.

So Georgia and Scott agree to appear in a new program, pitting them against other teams in an athletic journey across the countryside of Spain for a chance to win $250,000. But the fierce competition turns frightening when Scott disappears during an overnight camping trip in the Pyrenees Mountains, leaving only his bloody wristwatch behind—and a woman’s dead body.

With the Spanish authorities ready to convict Scott, Georgia must find him and prove his innocence in an amazing race against crime…

What did I think of this book:
This was a good addition to a fun series. I enjoyed following Georgia and Scott as they went to Spain to try and win a pot load of money. The author will keep you turning the pages as you follow along on this adventure to prove that Scott is innocence. I liked the reality tv theme to this series as I am a fan of some reality shows. Now don't judge me I watch the shows for entertainment and not for the reality. I liked how I was kept guessing up until the end. I think the author's writing style is good and makes the book flow.

About the author:
Diana Orgain was born in San Francisco, CA. As a child she loved Hardy Boys and Nancy Drew mysteries and dreamed of being a writer one day. She went on to earn her B.A and M.F.A. in Creative Writing from SFSU with a minor in acting. Diana has acted professionally in many theater roles and national commercials. She' wrote several plays, which were produced in San Francisco State University. Bundle of Trouble: A Maternal Instincts Mystery (pub Berkley Prime Crime) is her first novel."

For Love or Money Mystery Series:
#1 A First Date With Death
#2 Second Chance at Murder
Posted by Angela - Bookaunt at Tuesday, January 05, 2016